The 84mm Carl Gustav recoilless rifle (aka, “The Goose”) is almost as famous as the US Bazooka and the British PIAT – and it also fairly close to those two in age as well. The Bazooka and PIAT were created and used during WWII, while the Carl Gustav was designed in 1946 and entered service with the Swedish Army in 1948. That makes it one of the longest serving and most successful multi-purpose launcher systems ever made.

Nicknamed the “Charlie G” by the Brits, the “Carl G.” by the Canadians, “The Goose” by the Americans, and the “Charlie Guts-ache” by the Australians, the Carl Gustav is also one of the most widely used multi-role, anti-armour, anti-personnel, recoilless, weapons systems ever made. The original M1 version was replaced by the M2 model in 1964, which was lighter and shorter, and by the modernized and further lightened M3 version in 1991. The M3 model would go on to be adopted and used by the British Special Air Service, Royal Marines and Parachute Regiment, and by the United States Army Special Forces and Rangers in bunker-busting and anti-vehicle roles. In 2011 the US Army also began issuing the M3 to regular infantry units deploying to Afghanistan – where it enjoyed great success as a building-buster and with air-burst ammunition against insurgents covering down behind walls or in irrigation ditches.

The latest and greatest version of the Gustav, the M4 (M3-E1 in the US), was introduced in 2014 and was once again shortened and lightened. The shorter length was requested by by users who needed to wield the weapon in urban environments, and thanks to the use of new materials, combined with the shorter length, the M4 Carl Gustav shed 7.5 pounds of weight, to tip the scales at a total of only 15 pounds when unloaded but ready to use. Other new features on the M4 included a new red-dot type sight, a safety catch to allow it to be carried while loaded, an adjustable shoulder rest and forward grip for improved ergonomics, a shot counter to track rounds fired for managing the weapon’s barrel life, picatinny rails for additional targeting accessories, and a remote function for communicating sight information to programmable rounds. 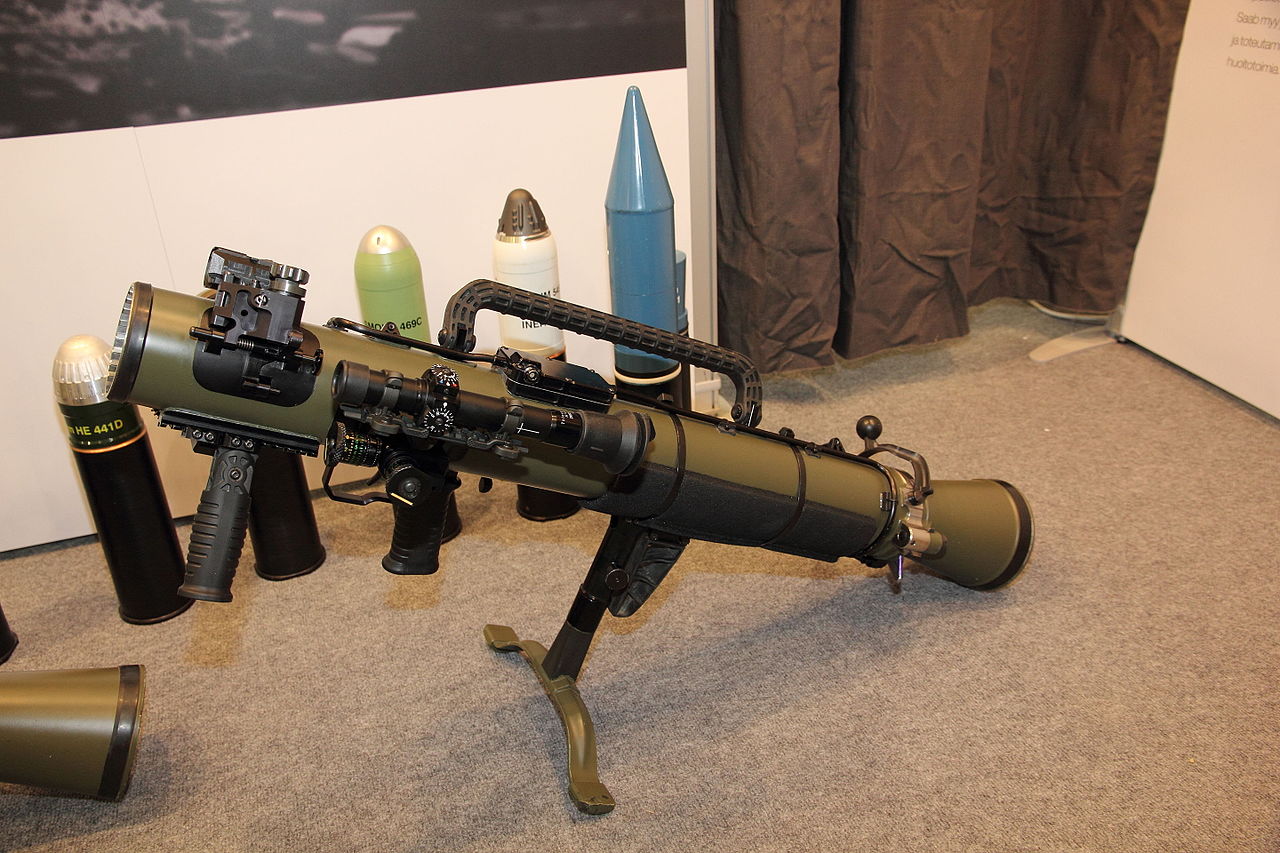 I got a chance to try out the computerized training simulator system for the M4 Gustav at Saab’s booth at the AUSA Exposition this month. I can attest that the M4 is actually quick and intuitive to use (having never even picked one up before), and the weight rests quite easily on your shoulder. With the Saab instructor acting as my number 2, I very quickly got the hang of sighting in on a moving T-72 tank and after missing with the first hasty shot I then successfully destroyed the vehicle with my next two shots (the system was set up to require 2 hits for a kill). Frankly, it was similar to playing World of Tanks, but a lot more fun! This training system from Saab enables Gustav crews to train any place and any time in a safe, convenient, and inexpensive way.

Shortly after getting my hands on the real deal I saw the exciting news about the airsoft M3 Carl Gustav coming from PAF Airsoft – and I suspect this would be even more fun than than the computerized training system I tried out at AUSA! PAF has sold out their trial units and are now taking pre-orders for the production version through their Facebook page.

PAF is known for undertaking unusual airsoft replica projects, like airsoft versions of the M2 Browning .50 calibre machine gun (in single tripod-mounted mode, or as a twin anti-aircraft version) and the Mk19 grenade machine gun. The M3 Carl Gustav looks like their most ambitious project yet, and is something that would certainly turn heads at your local field – as well as take milsim games to a whole other level. The PAF replica M3 will be made from composites and alloys like the original, and users will also be able to choose between two types of ammunition – a “tag” grenade for use against structures or vehicles, and a BB-shower for anti-personnel use. All of this unique goodness comes with a rather hefty price tag of about $1,15o USD – but that’s still a lot less than a real deactivated one would run you, and this one shoots projectiles! 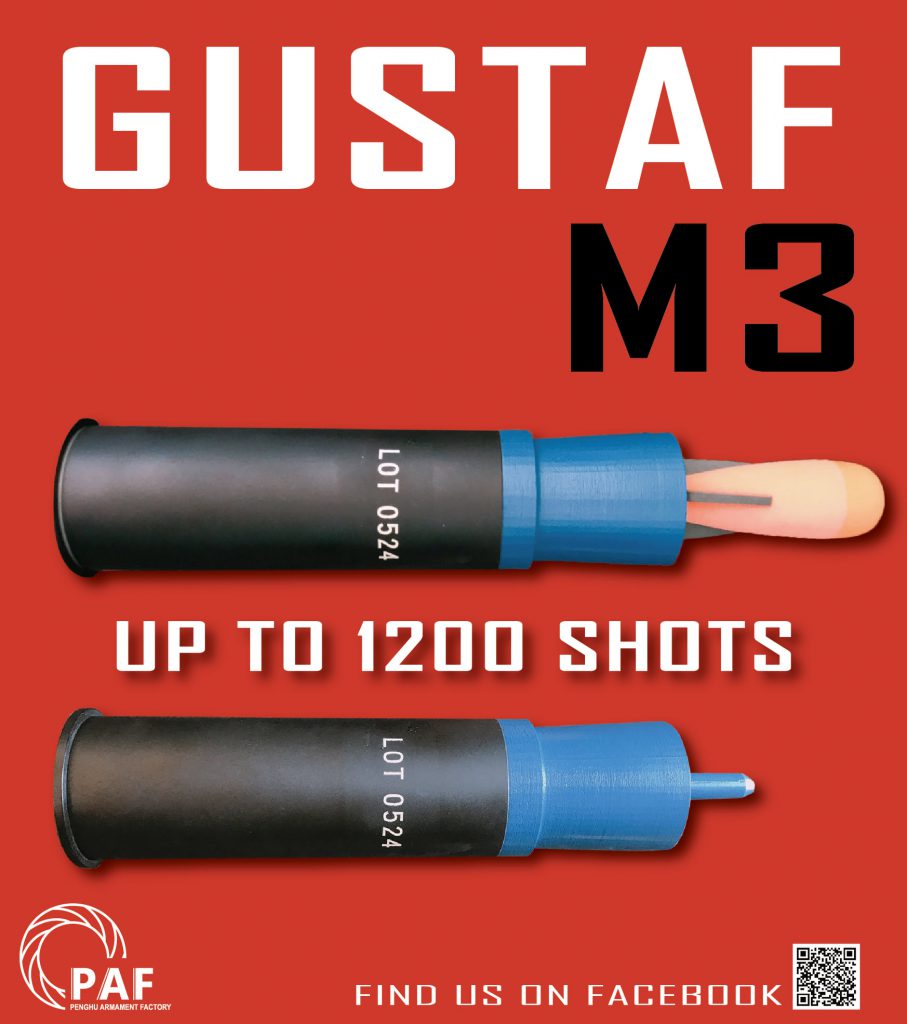 Check out PAF Airsoft online, and keep an eye on their Facebook page for further news about the Goose!