Operation Dragoon, the Allied invasion of southern France, was originally supposed to be launched simultaneous to the invasion of Normandy – thus catching the Nazi forces in France and Western Europe between the horns of a two-pronged assault. However, due to there not being enough ships, aircraft, crews, and materiel to allow both invasions to happen simultaneously, the southern invasion was postponed. 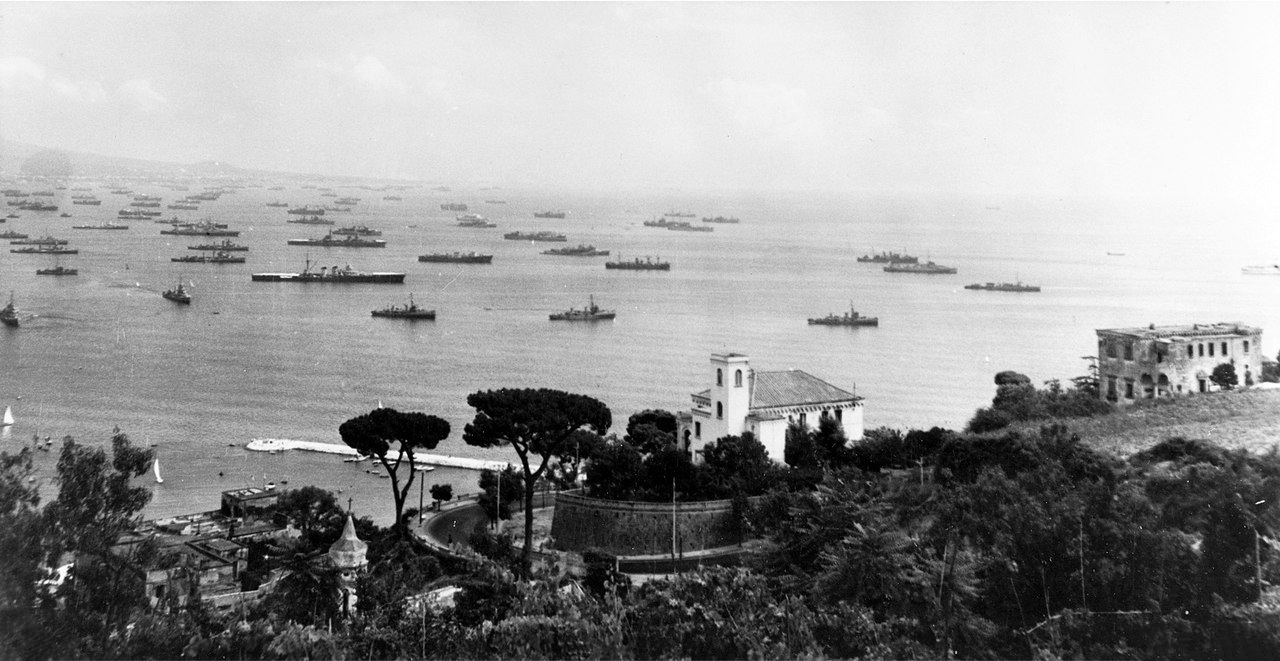 Sometimes known as “The Forgotten D-Day”, Operation Dragoon (earlier known as “Operation Anvil”, whilst the Normandy invasion was known as “Sledgehammer”) was re-scheduled for mid-August 1944. By that time it was also clear to the Allied High Command that another way into, and through, France was necessary because the Normandy ports could not cope with the volume of supplies needed to keep the armies fed, armed, fueled, and moving.

The goals of Operation Dragoon were to secure the vital ports on the French Mediterranean coast and increase pressure on the German forces by opening another front. After some preliminary commando operations, the US VI Corps landed on the beaches of the Côte d’Azur under the shield of a large naval task force, followed by several divisions of the French Army B.

Allied forces were opposed by the scattered forces of the German Army Group G, which had been weakened by the relocation of its divisions to other fronts and the replacement of its soldiers with third-rate Ostlegionen outfitted with obsolete equipment. Hindered by total Allied air superiority and a large-scale uprising by the French Resistance, the weak German forces were swiftly defeated.

The remaining German forces withdrew to the north through the Rhône valley, to establish a stable defense line at Dijon. Allied mobile units were able to overtake the Germans and partially block their route at the town of Montélimar. The ensuing battle led to a stalemate, with neither side able to achieve a decisive breakthrough, until the Germans were finally able to complete their withdrawal and retreat from the town. While the Germans were retreating, the French managed to capture the important ports of Marseille and Toulon, putting them into operation soon after. 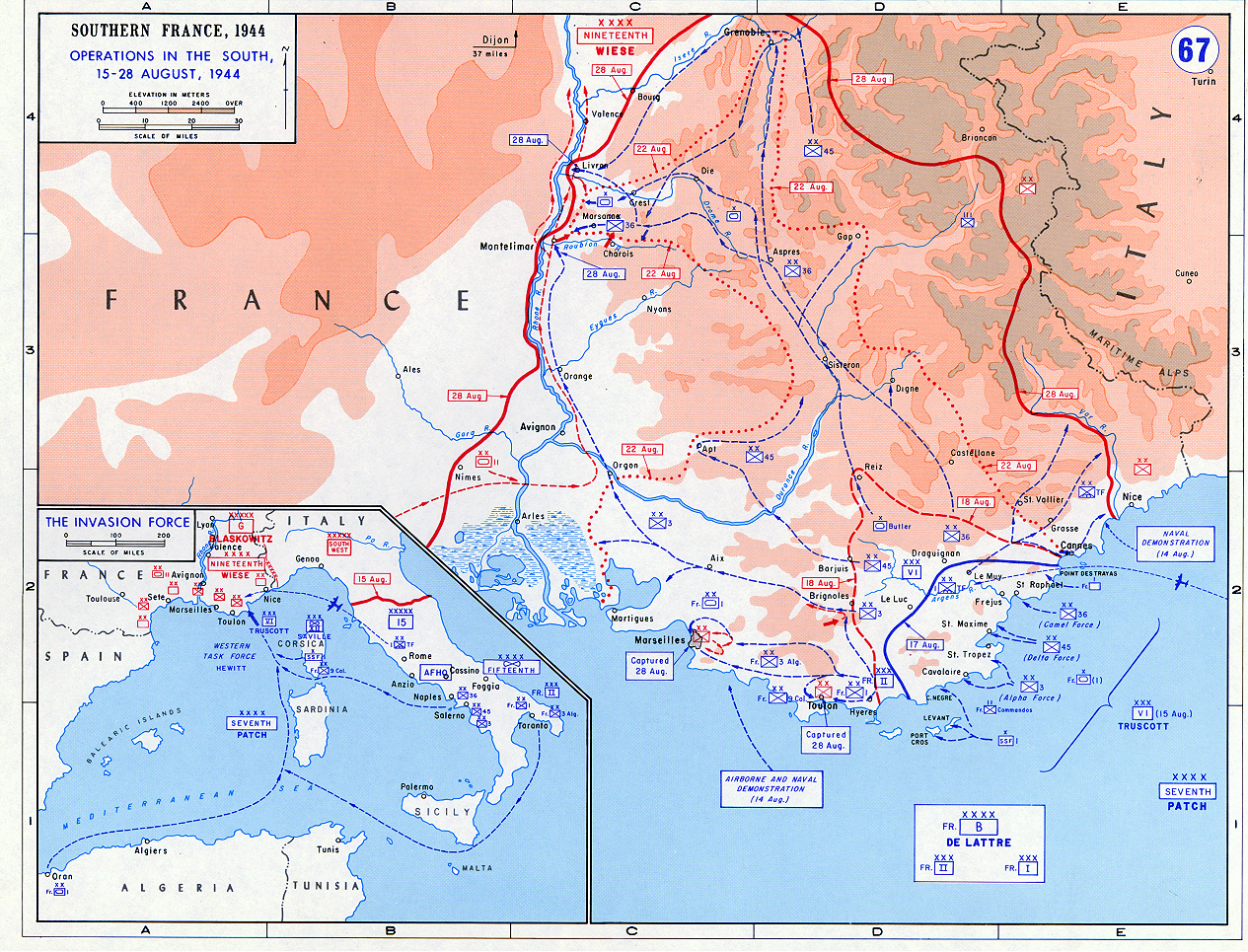 The Germans were not able to hold Dijon and ordered a complete withdrawal from Southern France. Army Group G retreated further north, pursued by Allied forces. The fighting ultimately came to a stop at the Vosges mountains, where Army Group G was finally able to establish a stable defense line. After meeting with the Allied units from Operation Overlord, the Allied forces were in need of reorganizing and, facing stiffened German resistance, the offensive was halted on 14 September – one month to the day after the invasion.

Three days after the end of Operation Dragoon, on the 17th of September 1944, “Operation Market-Garden” was launched. With Operation Market-Garden the Allied Command sought to leapfrog over the German forces in The Netherlands – using airborne forces to capture key bridges over the Rhine – and then punch through into the industrial heartland of Germany.

Operation Dragoon was considered a success by the Allies. It enabled them to liberate most of Southern France in a time span of only four weeks, while inflicting heavy casualties on the German forces. Although a substantial part of the best German units were able to escape, the captured French ports were put into operation, allowing the Allies to solve their supply problems. 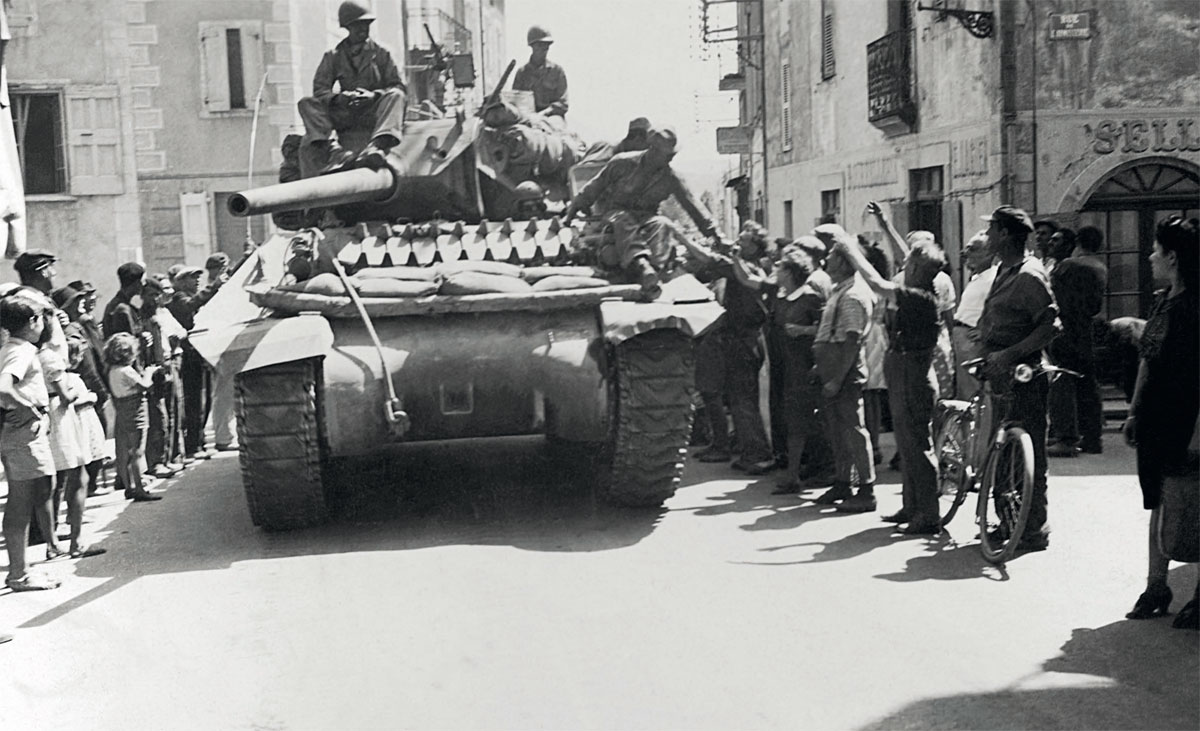 Article features some text and photos from Wikipedia.

This week marks the 75th Anniversary of Operation Dragoon, and once again our friends from the WWII Airborne Demonstration Team are on the ground and in the air doing what they do best – commemorating the brave troops of the Airborne Forces who were critical to the Allied victory. They recently posted a “Dispatch from the front lines” on their Facebook page, and we’d like to share that with you: 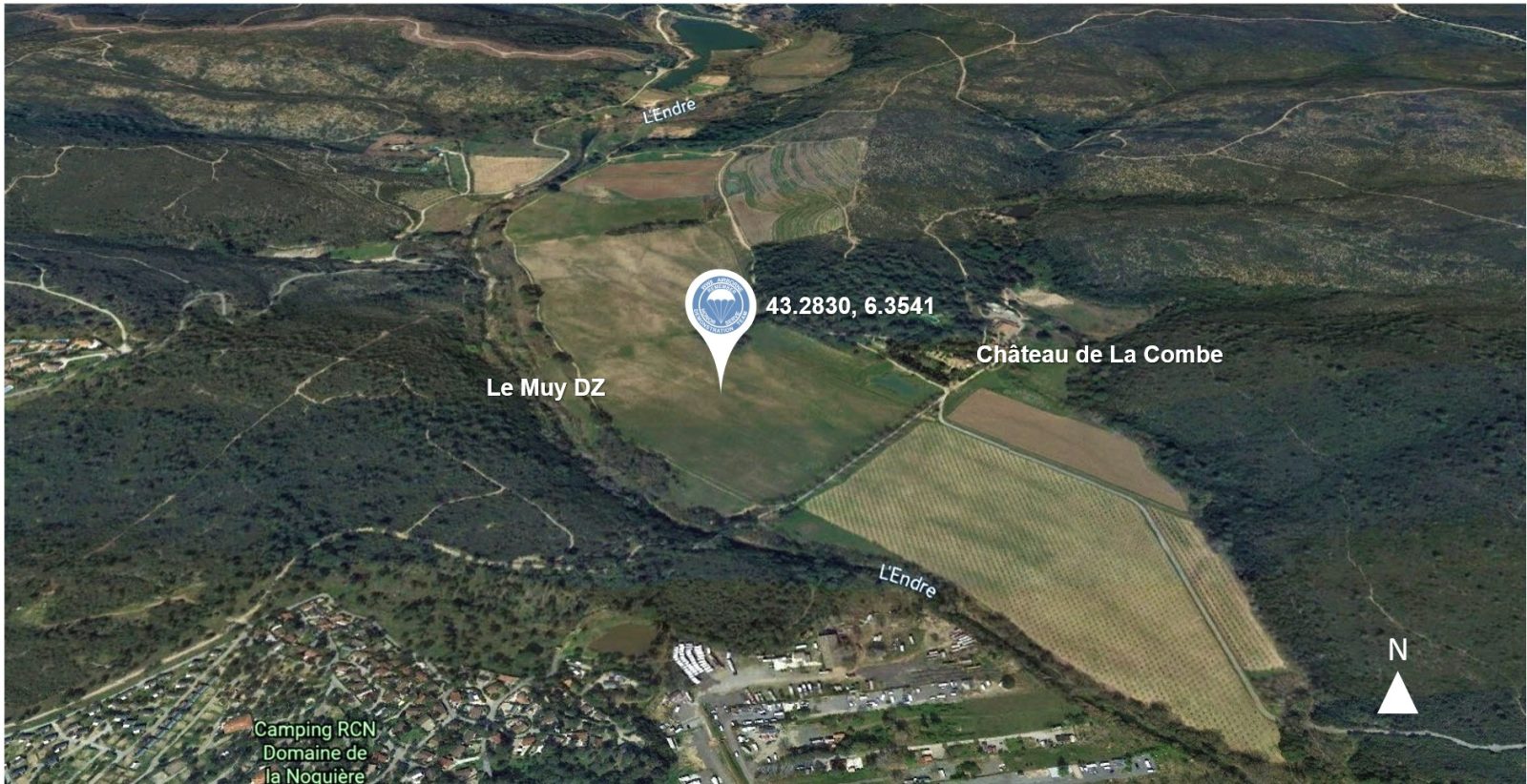 Dragoon Update—Photos from the front!

U.S. Army Airborne, British Airborne, and U.S. Marine Corps Airborne attached to the Office of Strategic Services—we’re privileged to be honoring them all! These units were part of the Allied 1st Airborne Task Force represented by our team members here. 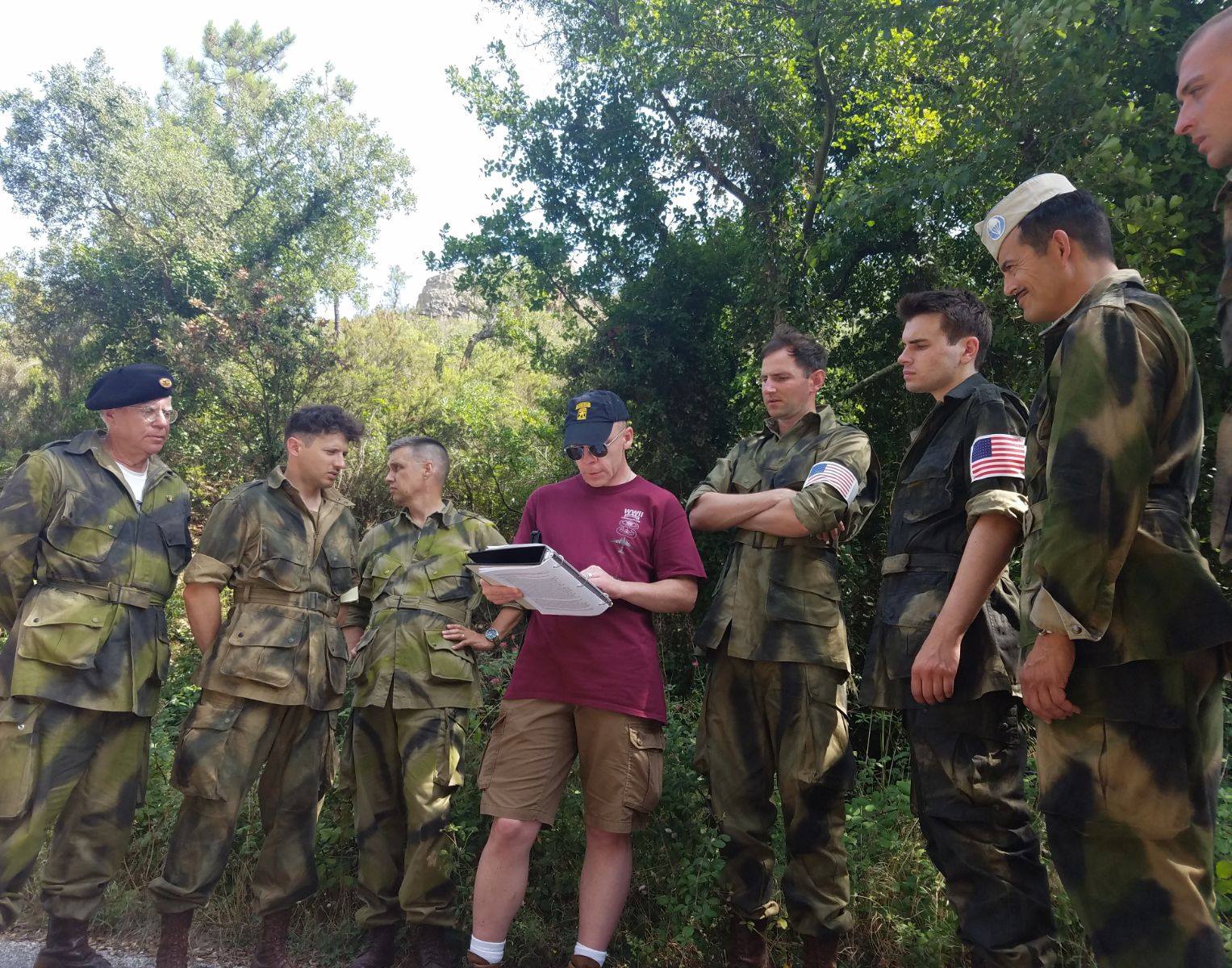 The 1st Airborne Task Force was a short-lived airborne unit created specifically for Operation Dragoon–the invasion of Southern France. The combined unit strength was 9,000 men. It consisted of a near-random grouping of parachute infantry regiments, many of which had served in Italy and which were accustomed to the mountainous terrain of Southern France. During Dragoon, most landed in drop zones like the one seen here. Forests and mountains made the area dangerous, but also forced units to be split apart, testing their true abilities as Airborne infantry. 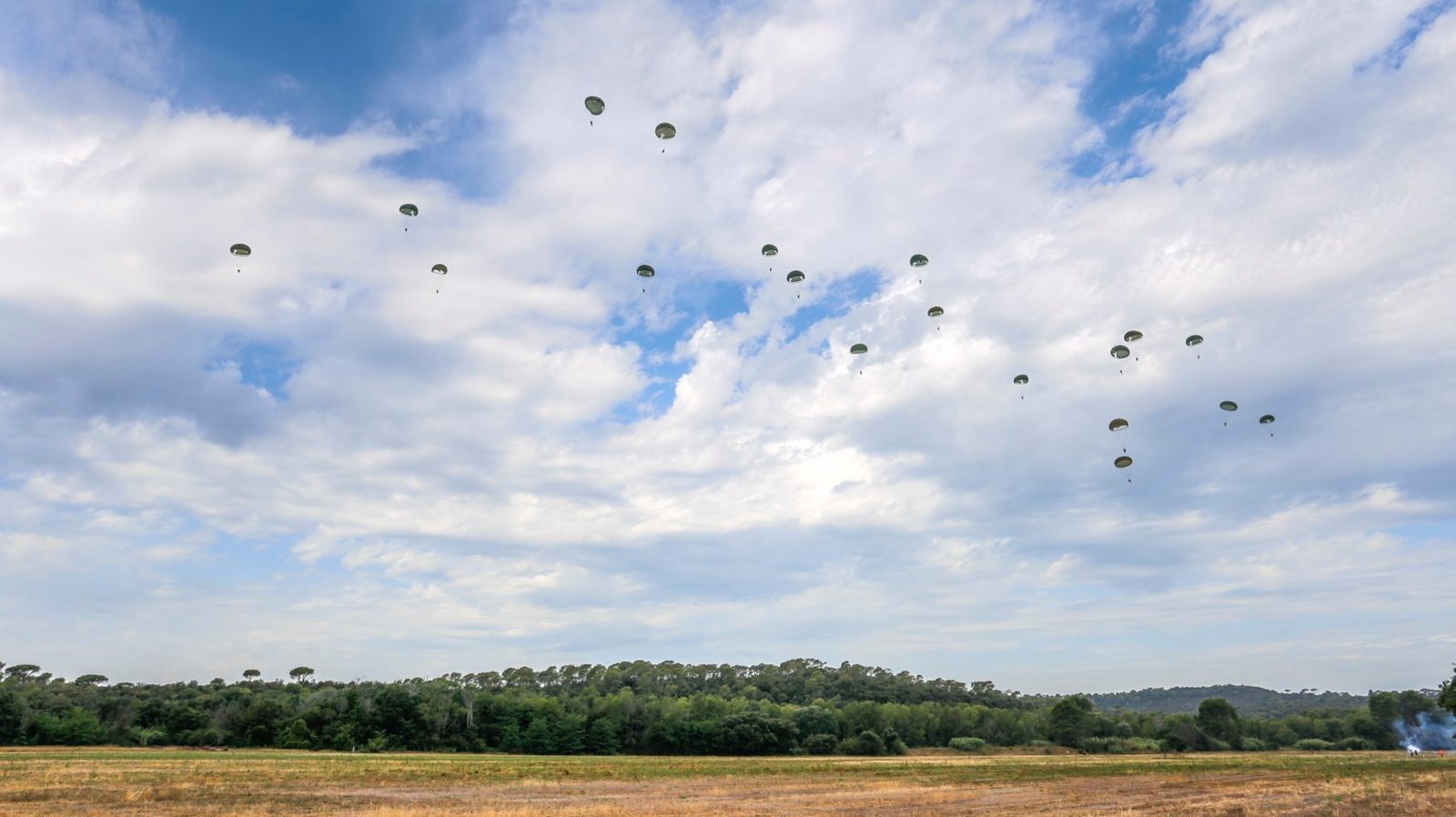 Among the units we honored during our jump on Monday was the 551st Parachute Infantry Regiment. Virtually nothing of the 551st’s history was known to the American public until a renewed interest in the unit in the 1990’s prompted veterans to seek recognition for it. The 551st was originally commissioned to capture the French Island of Martinique which was being used as a supply station for Nazi U-Boats. The 551st trained in secret in Panama far away from the more famous Airborne regiments. The invasion of Martinique was called off, but Operation Dragoon put the 551st on French soil, nevertheless. 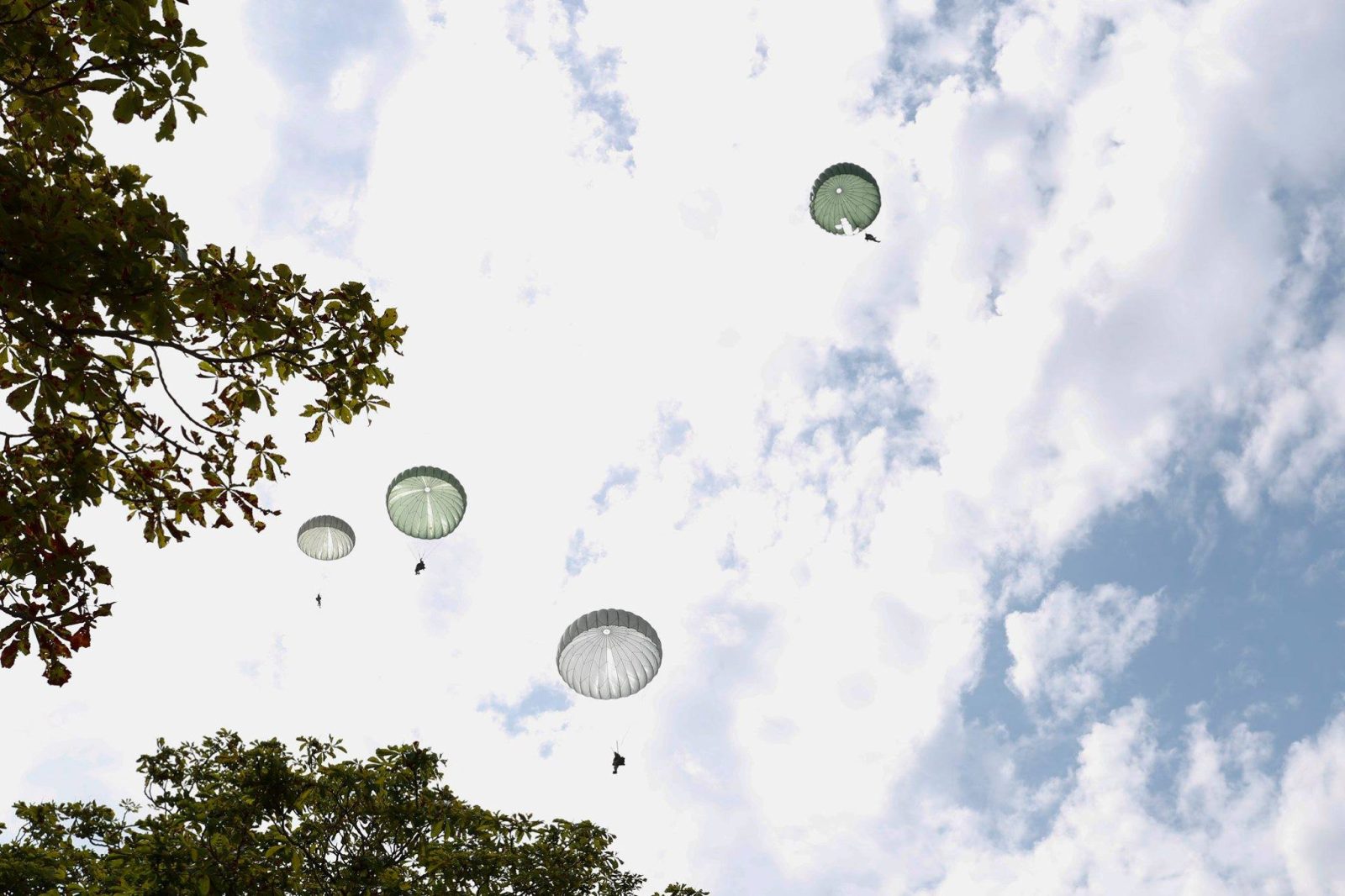 On the fog-blanketed morning of August 15th, the 551st parachuted into a drop zone not far where we are shown here. Immediately the 551st liberated the town of Draguignan and a week later, Nice. 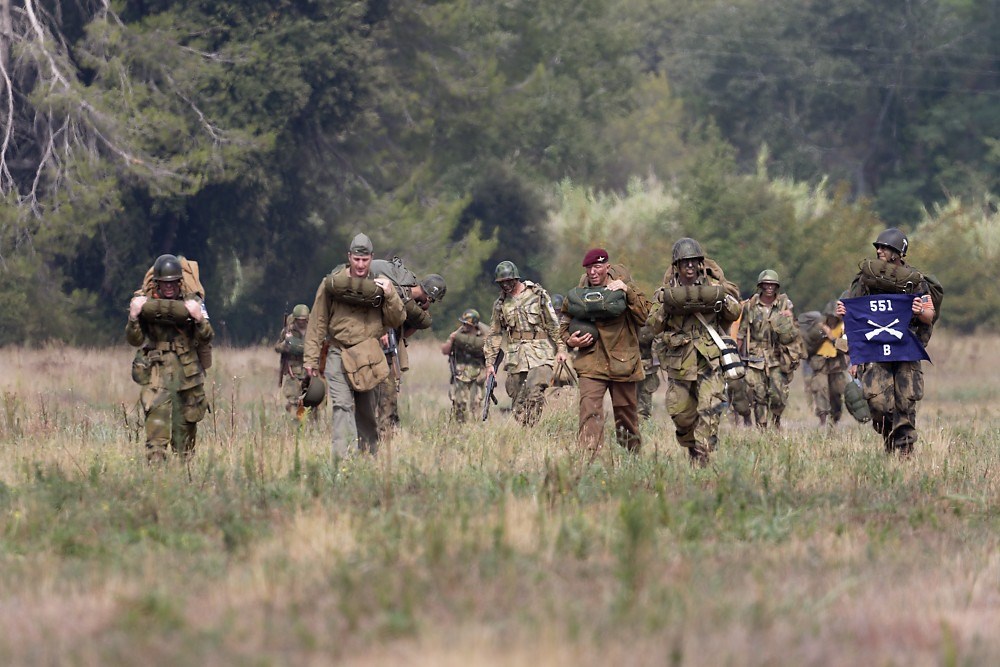 During the Battle of the Bulge this outlier within the Airborne community was summoned to take the fight to the enemy in the north. Assigned to move through the American lines and infiltrate four miles into Nazi occupied territory, the 551st achieved every objective assigned—but at a terrible cost. It entered the battle on January 3, 1945. By January 6, it had lost 85% of its troops. Of its 643 men only 14 Officers and 96 men lived to see the 551st’s victory.

The unit was famous for an acronym that many on our team take pride in sharing: GOYA. We’ll let you look that up. But it sums up a simple formula for life success. Of all the motivational messages and themes out there, we think the 551st had it right—one of the many reasons we admire them and want to make sure that their story stays alive to inspire others. 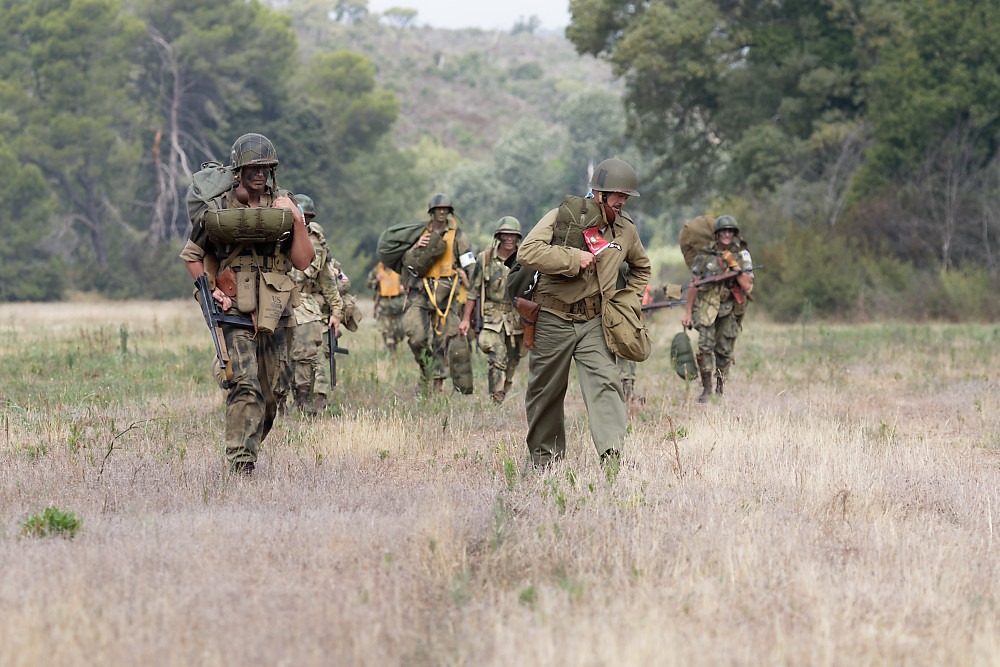 Special thanks to our friends and brothers at French Airborne Command for inviting us to join them and for making this jump possible. To the memory of all who served in 1st Airborne Task Force and to the 551st, we salute you! Airborne All The Way!