August 16, 1940, marks the date of the first official U.S. Army parachute jump at Ft. Benning, Georgia. Although the US lagged behind other nations in the development and deployment of Airborne Forces, US airborne units went on to fight valiantly on every front in WWII, and were critical to the Allies success. Today, airborne units still represent some of the most prestigious and expertly trained forces in the United States military. The creation of August 16th as ‘National Airborne Day’ was made by President Bush in 2002 and ratified by the US Senate in 2009.

For today’s Friday Foto we feature another great shot of our friends from the WWII Airborne Demonstration Team on-site in southern France for the 75th Anniversary of Operation Dragoon. And there’s a little history lesson to go along with it… 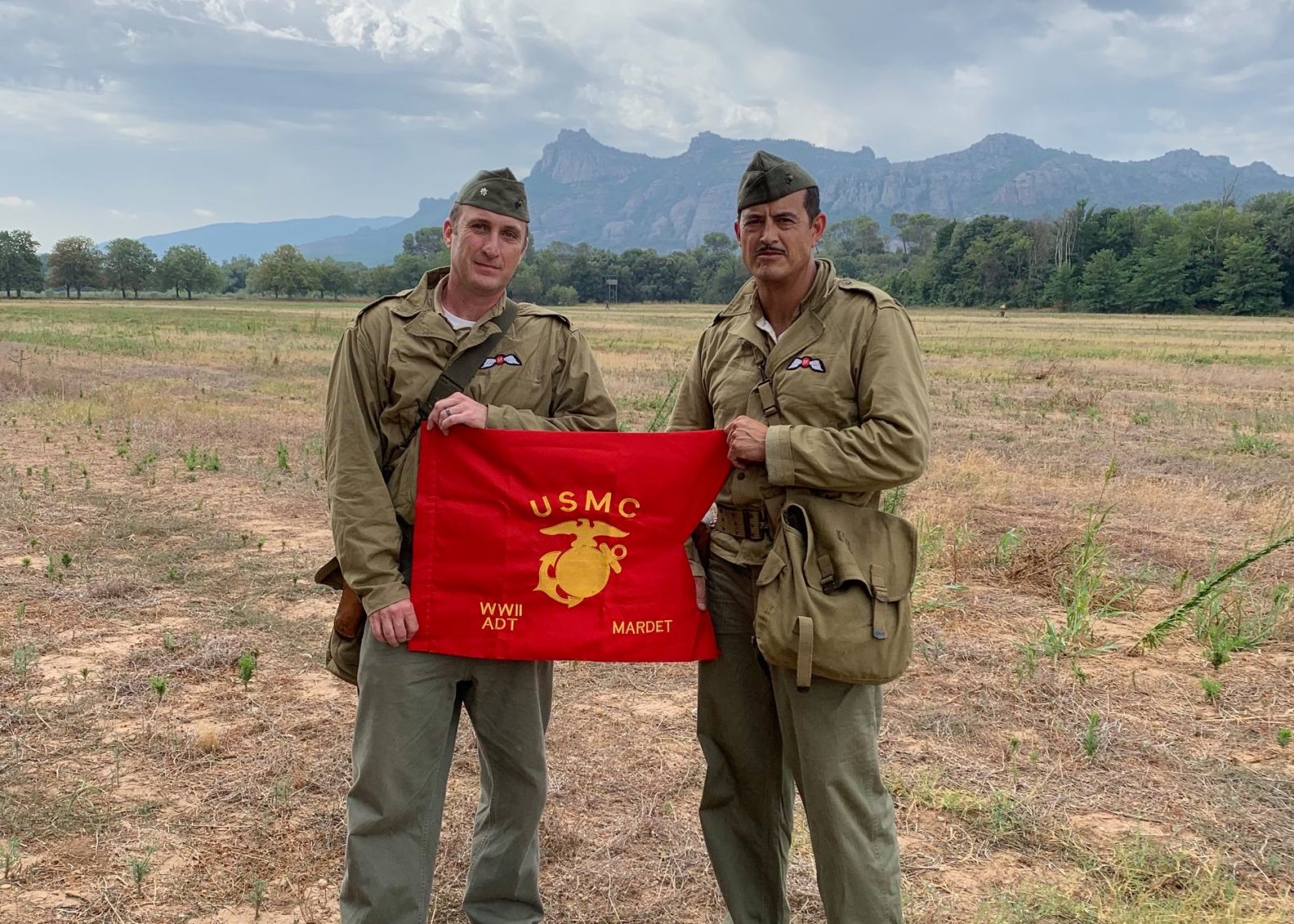 If you’re a Marine, this is a must read. Most of WWII Marine Corps history takes place in the Pacific. But here’s a case of often-overlooked USMC history. Our jump today celebrating the 75th Anniversary of Operation Dragoon went off without a hitch. We’ll have photos shortly. But did you know that surrounding Dragoon was a Marine Corps operation? These Marines pictured here jumped today to honor that operation.

Operation Union II was the Marine Corps’ operation in Southern France to support and work with the French Resistance to divert Nazi forces during the Allied invasion. Efforts started with USMC Captain Peter J. Ortiz who parachuted into occupied Southern France in January 1944 on assignment with the Office of Strategic Service (OSS). He and a small team spent the next five months in the French Alps (seen here in the background) training the French Resistance and ensuring that they were equipped.

After five months Ortiz returned to England and began assembling a team that would parachute back into Southern France to lead the Resistance in support of Dragoon. On August 1, fourteen days prior to the main assault, Ortiz, now a Major, dropped into an area not unlike that seen here. Ortiz was supported by six other hand chosen Marines and a Captain from the Army Air Corps. Dropping from only 400 feet to evade detection, their parachutes opened almost on landing. One Marine perished from a parachute failure. Another was injured and deemed ineffective for the mission.

Working with the Resistance, the “Maquis,” Ortiz and his team began efforts to harass, probe, and distract Nazi forces. At one point, Ortiz and two of his men found themselves surrounded in the town of Centron. Ortiz who was fluent in German, French, English and Arabic, negotiated a surrender, knowing that continued fighting would result in the destruction of the town for “harboring spies.” Not long after being taken into captivity…Ortiz and his men escaped!

There is so much more to this story than we can share. Every detail, though, is a credit to the United States Marine Corps and their contribution to achieving the liberation of France.

Major Ortiz was the most highly decorated member of the OSS during the war with over 18 citations, including the Navy Cross with Gold Star. Prior to WWII he had served with the French Foreign Legion in North Africa. He had been captured by Nazi forces in 1940 but escaped and made his way to America where he joined the Marines. By the end of the war he rose to the rank of Lieutenant Colonel. After the war he pursued a successful career in Hollywood. He passed away in 1988 at the age of 74. He is buried in Arlington National Cemetery.

Our Marines here honoring the men of Operation Union II retired from the Marine Corps after multiple deployments. One a Lieutenant Colonel (left), the other a Master Sergeant. Thank you to them both for keeping the stories of our veterans alive to inspire a new generation! To all Marines, Semper Fi!