Today, 75 years ago:  August 15, 1944. U.S. paratroopers from the 517th PIR patrol a road after landing in Southern France during Operation Dragoon. 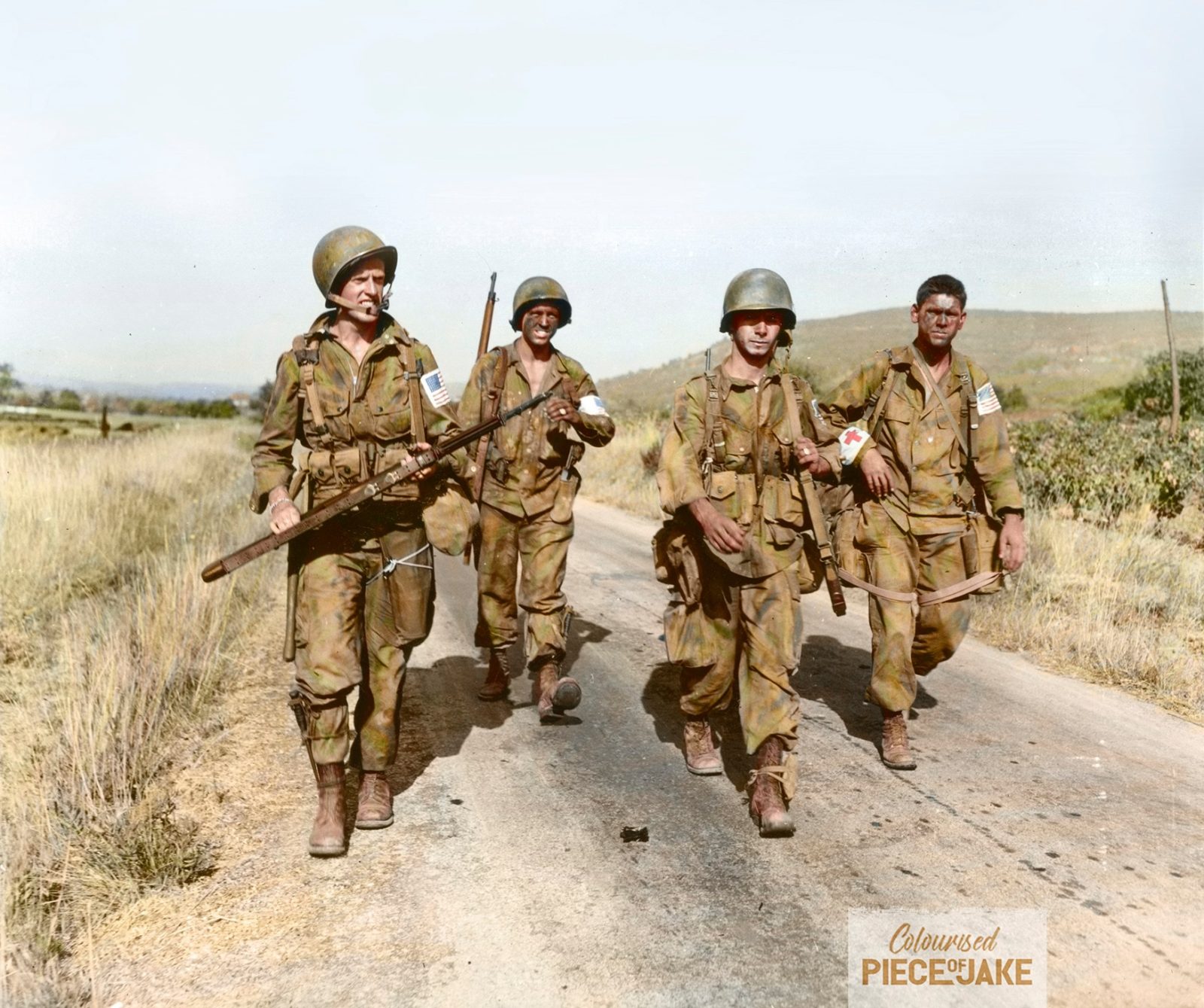 Operation Dragoon (initially Operation Anvil) was the code name for the Allied invasion of Southern France on 15 August 1944. The operation was initially planned to be executed in conjunction with Operation Overlord, the Allied landing in Normandy, but the lack of available resources led to a cancellation of the second landing. By July 1944 the landing was reconsidered, as the clogged-up ports in Normandy did not have the capacity to adequately supply the Allied forces. Concurrently, the French High Command pushed for a revival of the operation that would include large numbers of French troops. As a result, the operation was finally approved in July to be executed in August.

On Aug. 15, 1944, elements of the U.S. Seventh and the French First Armies landed along the coast of the French Riviera with major objectives including the capture of the port cities of Toulon and Marseilles. Prior to the amphibious landings, Operation Rugby, an airborne insertion near the town of Le Muy northwest of the invasion beaches, was conducted by the Seventh Army Airborne Division, later renamed the 1st Airborne Task Force.

The 509th PIB was a veteran outfit that had jumped into North Africa and fought in Italy at Anzio while also blunting a German offensive at Carano. The 550th and 551st were activated in the Panama Canal Zone, the 551st with a cadre of officers transferred from the 501st Parachute Infantry Regiment. Both units executed their first combat jumps during Operation Dragoon. The 517th PIR was activated in 1943 at Camp Toccoa, Georgia, and participated in the Italian Campaign before its transfer to Operation Dragoon. As independent battalions, these formations were attached to various larger units on numerous occasions during the war, and some were absorbed. The 509th remained independent throughout the conflict.

As the C-47 transport planes approached the coastline of southern France before daylight, thick ground fog rose to an altitude of 800 feet, obscuring drop zones and rendering them either difficult or impossible for pathfinders to mark accurately. The resulting jump scattered some of the paratroopers widely, with many of the Americans coming to earth at distances of eight to 15 miles from their assigned drop zones; the British drop was reasonably accurate.

Despite their wide dispersal, most of the American paratroopers reached their assembly areas within a couple of hours. The 517th PIR occupied a series of hills five miles (8 km) west of Le Muy with observation of the coastal route from Toulon to Saint Raphael. South of Le Muy, the 509th consolidated its positions on high ground with support from 11 75-mm pack howitzers of the 463rd Parachute Field Artillery Battalion. Companies B and C of the 509th had parachuted near the city of St. Tropez and quickly took control there. Around 8:30 that evening, 509th troopers made contact with elements of the U.S. 45th Infantry Division advancing from the Allied beachhead.

A night attack against Le Muy by the 550th Glider Infantry Regiment was driven back, in part due to a lack of available artillery support. However, the effort was renewed the following day. By 3:30 p.m. on August 16, the town was clear of Germans and 170 enemy soldiers were captured. Allied forces steadily moved inland, and on the morning of the 17th, troops of the 36th Infantry Division had entered Le Muy.
Following the initial success of Operation Dragoon, the 1st Airborne Task Force continued to cover the eastern flank of the Seventh Army while pushing northeastward to occupy Cannes and Nice. While cooperating with Resistance fighters of the French Forces of the Interior (FFI), the paratroopers of the 509th moved on to La Courbaisse, Lantosque, and the ski resort of Peira Cava near the Italian border. The Germans defended the Fort Milles Fourches area vigorously, and heavy combat took place along with the delicate job of removing thousands of land mines that the enemy had buried. The airborne troops subsequently halted their advance in the Maritime Alps along the French-Italian frontier and assumed defensive positions.

In November 1944, several units of the 1st Airborne Task Force were withdrawn to Soissons, and the unit was officially disbanded later in the month. The 509th PIB was pulled back to La Gaude, east of Nice, until early December, when orders were received to move north to Villers-Cotterêts for duty with the 101st Airborne Division. During its short existence, the task force had spent approximately three months in the front lines.