Everyone who likes “Old School Cool” classic Cold War, ‘Rainbow Six’ and ‘Call of Duty’ weapons got very excited when VFC (VegaForceCompany) showcased their beautiful new gas-blowback replica of the renowned Heckler & Koch PSG-1 precision marksman rifle at the MOA Show in Taiwan back in November. 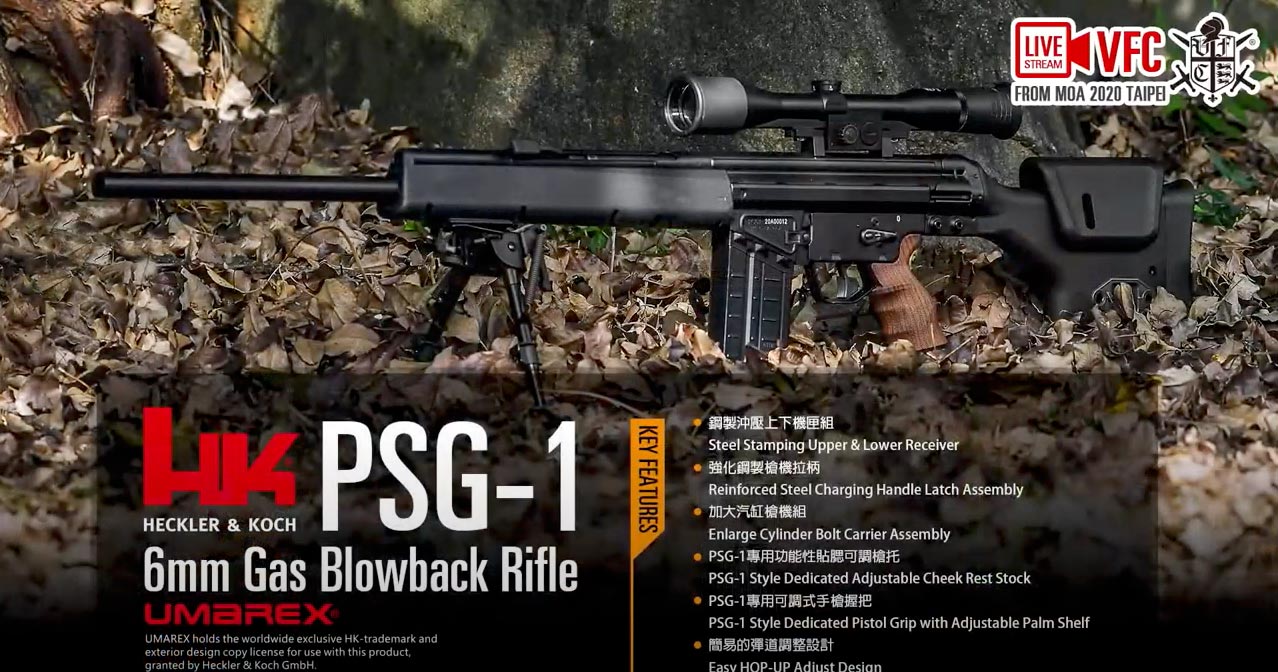 The real-steel PSG-1 (Präzisions Schützen-Gewehr, German for “precision marksman rifle”) was a 7.62x51mm NATO semi-automatic sniper rifle designed and produced by the German company Heckler & Koch. Although it is often claimed that the PSG-1 was developed in response to the woefully inadequate performance of the police sharpshooters and their rifles during the deadly conclusion of the 1972 Munich Olympics hostage situation, development of the PSG-1 had actually begun in 1968.

Certainly the Olympic massacre proved beyond any doubt that a precision rifle was an absolutely necessary tool in the armory of modern police forces. Accordingly, the conclusive development of the PSG-1 was pushed forward with greater urgency and the rifle entered service with West German armed / anti-terrorist police units in late 1972.

The PSG-1 was mechanically identical to the Heckler & Koch G3 battle rifle with its roller-delayed blowback operating system. The PSG-1 however had a strengthened receiver with rails welded over the channels where a retractable buttstock would slide on the G3. It also featured numerous other upgrades to make it more accurate than a typical G3; for example, the locking rollers that hold the bolt in battery during firing are not cylindrical as on G3 rifles, but semi-cylindrical shaped to offer a more precise positioning and locking into the locking recesses in the barrel extension. It also has a heavy free-floating barrel with polygonal rifling – all of which delivered accuracy better than 1 minute of angle (MOA) with match ammunition. Although this level of accuracy would not be considered all that special nowadays, especially compared to bolt-action sniper rifles, it did give the PSG-1 bragging rights as one of the most accurate semi-automatic rifles available back in the day. In keeping with its precision role, the rifle came equipped with the Hensoldt ZF 6×42 PSG-1 scope. The scope had a built-in bullet drop compensation feature which can be adjusted from 100 to 600m range, and also featured an illuminated reticle for low-light conditions.

The PSG-1 also featured a removable adjustable trigger unit that allowed the trigger pull to be adjusted to individual preferences or unit SOPs. The pistol grip was also of a target-style with an adjustable palm shelf for additional precision fire control. The high-impact plastic buttstock of the PSG-1 was also specially shaped, and adjustable for length-of-pull and cheek weld. The rubber buttplate could also be pivoted a few degrees left or right to ensure the most comfortable and solid fit to the individual marksman. Lastly, there was no integral bipod fitted on the PSG-1. Instead, the fore-end featured a rail that permitted the attachment of different types of adjustable bipods.

The manual of arms for the PSG1 was a bit different from the standard G3 battle rifle too. With a typical G3 rifle the charging handle would be pulled to the rear and locked into position to hold the bolt open while the rifle was loaded, the charging handle would then be tapped or slapped to fly forward under pressure from the coiled recoil spring, in order to achieve a solid lock-up of the roller mechanism. On the PSG-1 that operator would slide the charging handle forward slowly, and quietly, after loading, and then push on the bolt-closing device mounted on the right of the receiver to achieve full seating and lock-up of the bolt (see photo above).

The HK PSG-1 set the standard for semi-automatic sniper rifles for many years and was adopted or used by the special units many countries’ law enforcement and military forces. In fact, it still soldiers on today in many parts of the world.

In airsoft terms, Tokyo Marui produced a high quality replica AEG years ago that is today considered quite collectible. The TM PSG-1 suffered from three serious drawbacks however. Firstly, as an AEG it couldn’t deliver anything like the true sniper feeling of precision fire for a ‘one shot, one kill’ experience. Secondly, the AEG mechanism it used was not a standard gearbox, it was a more complex, semi-auto system that was notoriously difficult to upgrade – so you were stuck with stock Japanese-legal (ie, low-power) performance. Lastly, due its all plastic construction, it suffered from a fair amount of body flexing and creaking in use – and gained a reputation for being easily broken under field use conditions as well. But if you wanted an airsoft PSG-1, it was your only option.

The new HK-licensed VFC / UMAREX GBBR PSG-1 is going to change all that, and then some! First of all, it’s a fully licensed product with the same dimensions and markings as the real-steel original. Adding to the realism is the fact that the receiver is made from stamped steel – which mimics the same process used for the real firearm, and which will make for a much more robust replica than the old TM version. The front handguard and stock are made from high-quality impact-resistant plastic and also match the appearance and dimensions of the real PSG-1. Continuing the authenticity, the pistol grip is made from well-crafted wood and features a fully-functioning adjustable palm shelf.

The high-quality impact-resistant plastic buttstock also features an adjustable cheek riser and buttcap so that you can achieve the perfect length of pull and cheek weld for your line of sight to match your scope of choice. This is important because the VFC/UMAREX PSG-1 does not come with iron sights, but does have a fixed picatinny rail for mounting any type of rail mountable scope. And this is our one complaint. As you can see, the rail is mounted rather high – which is unnecessary since there are no iron sights which the scope needs to clear – and it is also, disappointingly, not accurate to the replication of the original. As VFC’s promo photos all showed a rifle with an original style scope, many fans are disappointed that the version which has been released features only this rail mount instead. A proper replica of the original Hensoldt scope would have capped off this $800 replica perfectly. Or at the very least, a low rail mount of the type commonly available for other G3 replicas…

On the other hand, the internals of this replica sound excellent. The PSG-1 reportedly has a newly-designed enlarged and reinforced bolt carrier assembly that is specific to this gun. The gun uses the standard VFC/UMAREX 20-round G3 GBBR gas magazines, which reportedly have exceptional efficiency and deliver a strong recoil sensation to the shooter. (A replica of the 5-round PSG-1 magazine would be nice.) Combined with an actual adjustable trigger mechanism, the shooting experience / sensation will be as close to the real thing as you get in airsoft. The PSG-1 also features an easy to use hop-up adjustment and a last-round-fired-bolt-hold-open mechanism – something which the real-steel HK PSG-1 never had.

Rounding out the exceptional experience of this gun, VFC ships the PSG-1 GBBR in a custom-fitted carrying case. So, if you have $800 to spare, and don’t mind the lack of the 5-round style magazine or the absence of a replica of the Hensoldt scope, then this replica is sure to trip your trigger.

The VFC/UMAREX PSG-1 GBBR is now available for pre-order at Redwolf Airsoft and will be available from other retailers worldwide soon!