In honor of the 76th anniversary of “Operation Market-Garden” and the heroic action of the British 1st Airborne Division at Arnhem, our friends at the Old Time Design Company have published a fantastic recreation of how typical troopers would have been dressed and equipped for the drop.

Part 1: Men of the XXI Independent Parachute Company – a Pathfinder Unit – preparing for the jump into Occupied Holland on the 17th September 1944. 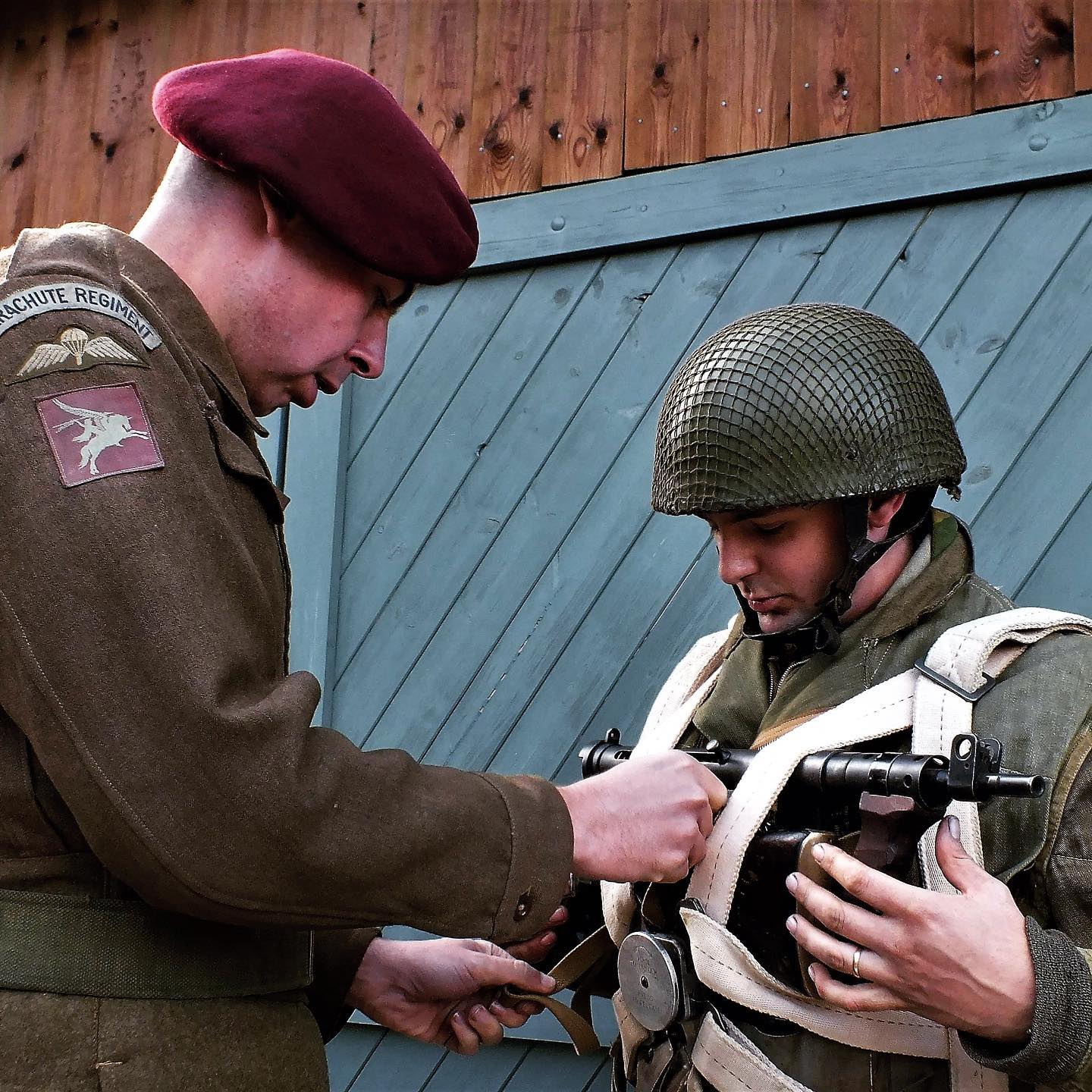 The Pathfinders role was to secure, mark and hold the allocated Landing & Dropping Zones for the main forces which would follow later. They left RAF Fairford in twelve Short Stirling Bombers, specially converted for parachute jumping. These aircraft were chosen rather than the more common Dakota, so the raid would not stand out and draw attention to the enemy.

It would be perceived by the enemy as an RAF bombing raid, something the RAF had been carrying up for several weeks beforehand so as not to arouse suspicion. The element of surprise was paramount, particularly for an airborne operation taking place during daylight.

Part 2: Ready to board his aircraft, this Parachutist wears the jump equipment typical to most infantry Paratroops who jumped into Arnhem in 1944. 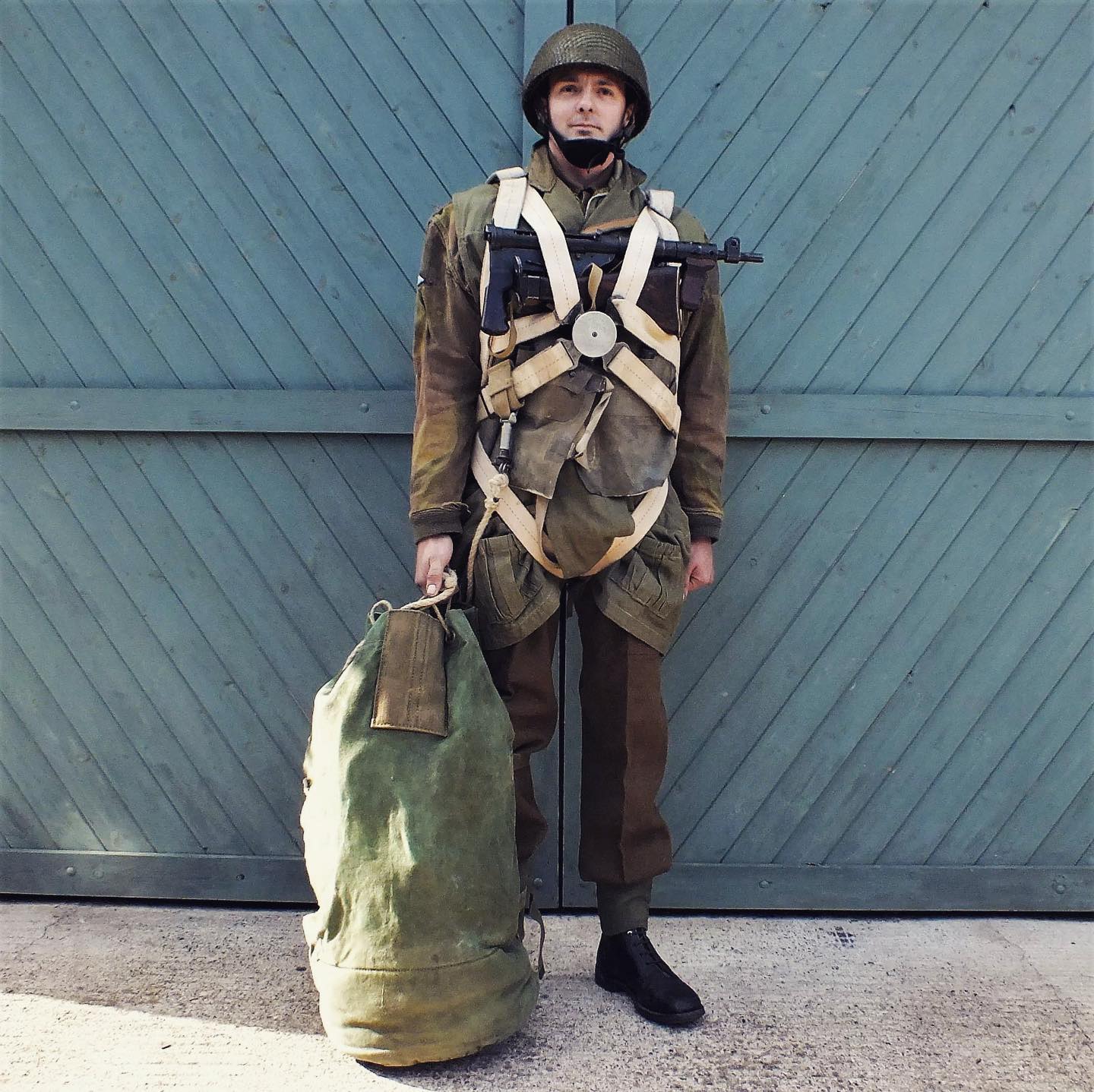 He wears the Mark II Airborne Helmet – developed for Airborne Troops – with his maroon beret folded inside his pocket. 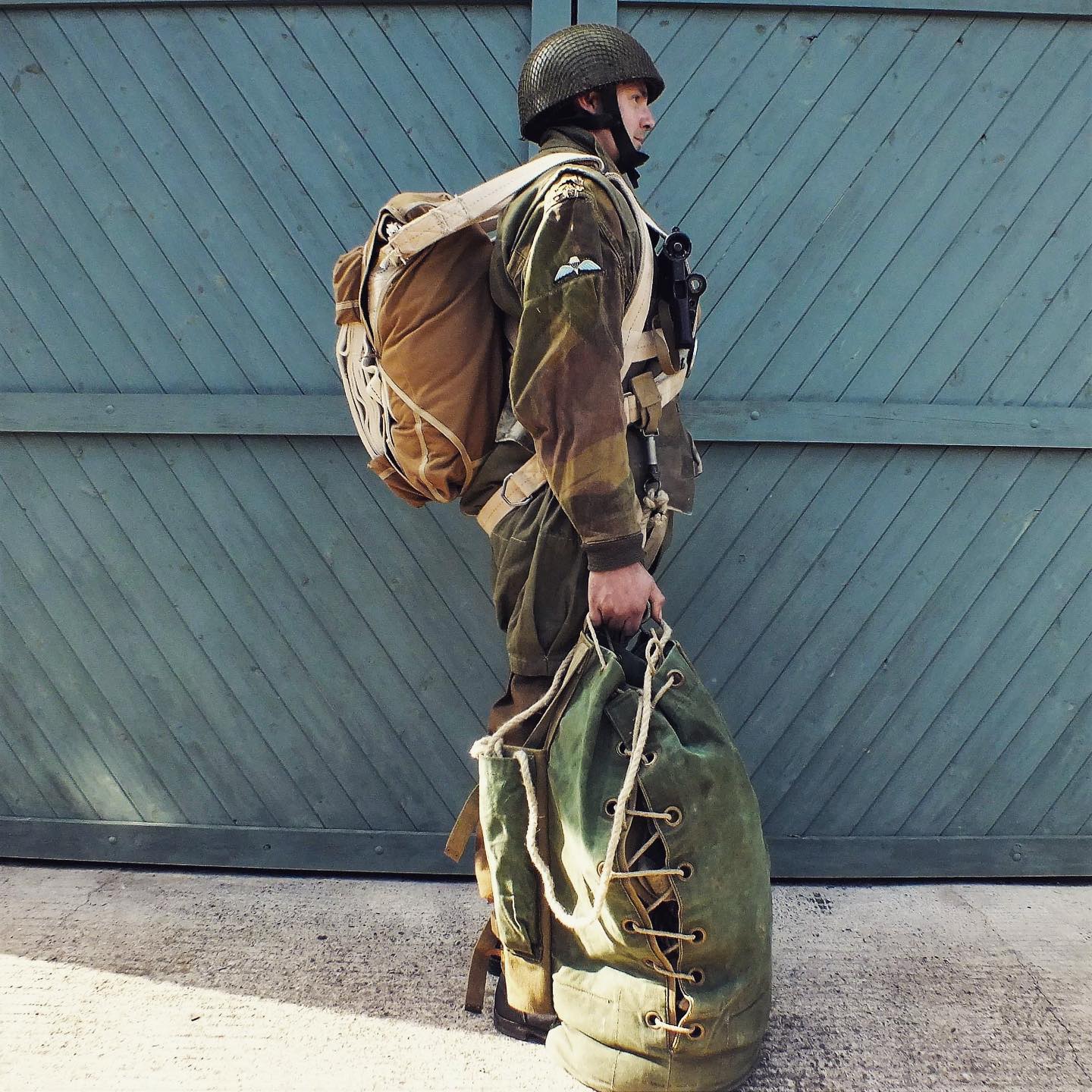 The Denison Smock, a specially designed garment for Airborne Forces, is worn over the Battledress Blouse and Trousers. 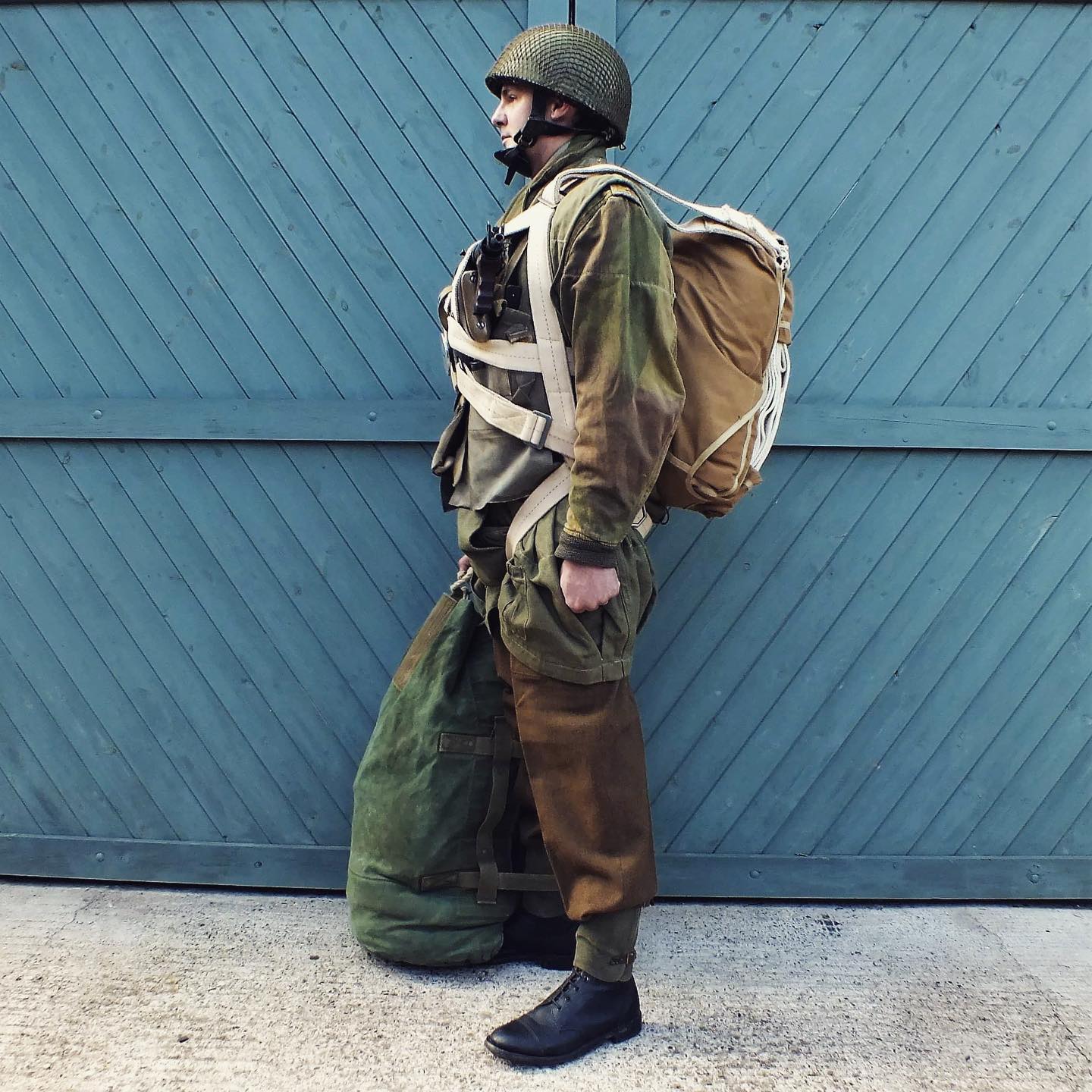 The Sten Mark V (specifically developed weapon for Airborne Forces) is stowed between the harness straps of the X Type Parachute; allowing for quick access when landing in the middle of a firefight. These variants were developed and refined from trial and error, with certain practices being preferred for specific roles. 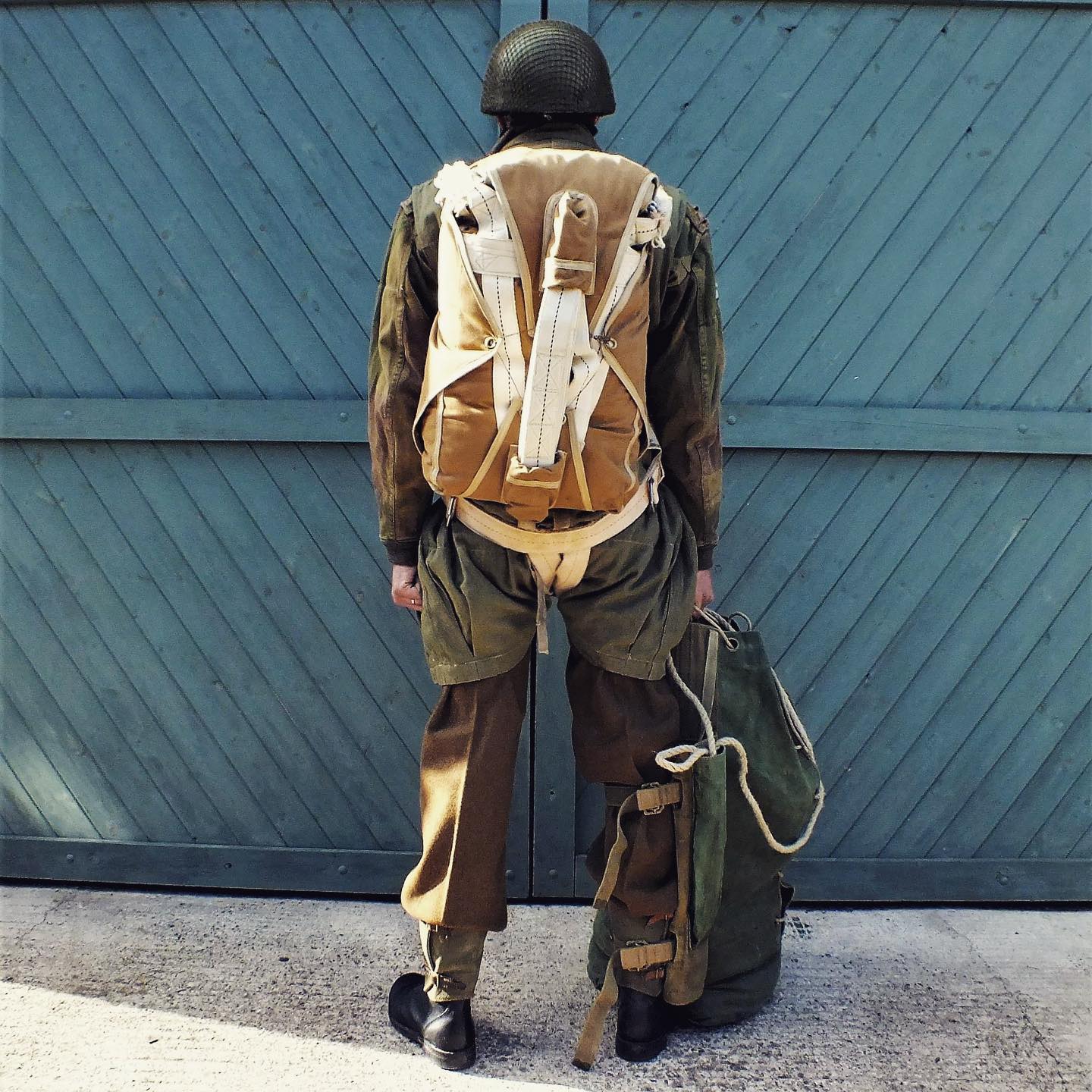 This particular Parachutist has chosen to not wear his 1937 pattern web equipment, choosing instead to pack this inside his leg bag (Lander bag). The Oversmock is still worn, with the Airborne Life Preserver over the top; another specially designed piece of equipment for just Parachutists.

Note: The Denison smock worn here is an original but new reproduction 1st Pattern Denison Smocks that will be available from Old Time Design Company soon! Keep an eye on their website and Facebook page for updates: oldtimedesigncompany.co.uk