We hope you’re enjoying our little trip down Memory Lane with a look back at HK’s 5.56mm weapons platforms from the 1960’s up to the 1980’s. Today we’re going to take a closer look at the baby of the family at that time – the short barrelled HK53 “submachine gun”.

A submachine gun in 5.56x45mm you ask? Yes, that is how HK classified this particular small arm. The HK53 was derived from the HK33 rifle platform, but with the intention of providing a weapon that combined the compactness of the MP5 with the heavier punch of an assault rifle. In comparison terms, it was in the same playing field as the Colt XM177 / Colt Commando and the Russian AKS-74U “Krinkov”. The HK53 was available with a solid synthetic stock as well as a retractable “wire” stock. There were also different types of foregrips and sighting systems available. In fact, most MP5 fore-ends also fit the HK53 and of course it was also cross-compatible with virtually all HK33 parts too. From a modularity, scalability and platform familiarity perspective, it was years ahead of its time.

The HK53 fed from the same 25, 30 or 40 round box magazines as the HK33, but weighed almost 1 kg less than the ’33. Nonetheless, at just over 3 kg (7 lbs.) UNLOADED, the HK53 was fairly heavy by submachine gun standards. On the upside, that heavier weight helped mitigate the increased recoil impulse of the rifle-caliber 5.56mm round.

Although it never achieved the same widespread level of adoption as the MP5, the HK53 did perform notable service with many specialized military and police units around the world. The HK53 was perhaps most notably used by a variety of British military units, including the SAS, Royal Marines and the Royal Military Police Close Protection Unit (the HK53 was designated the L101A1 in British service). Heckler & Koch stopped manufacturing the HK33 and HK53 in the early 2000s, focussing instead on promoting the G36 family.

And now for the fun part – check out Larry Vickers giving his impressions on the HK53 in the video below – click on the image to watch: 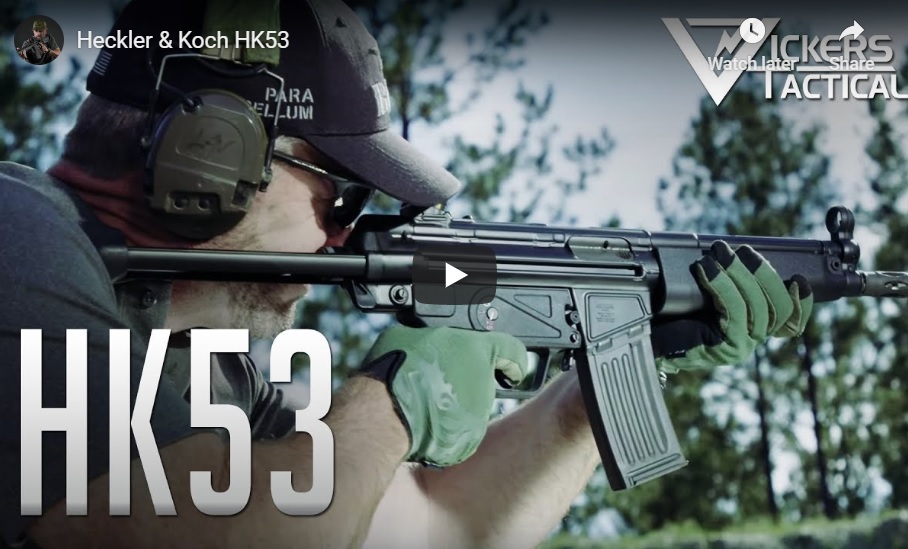