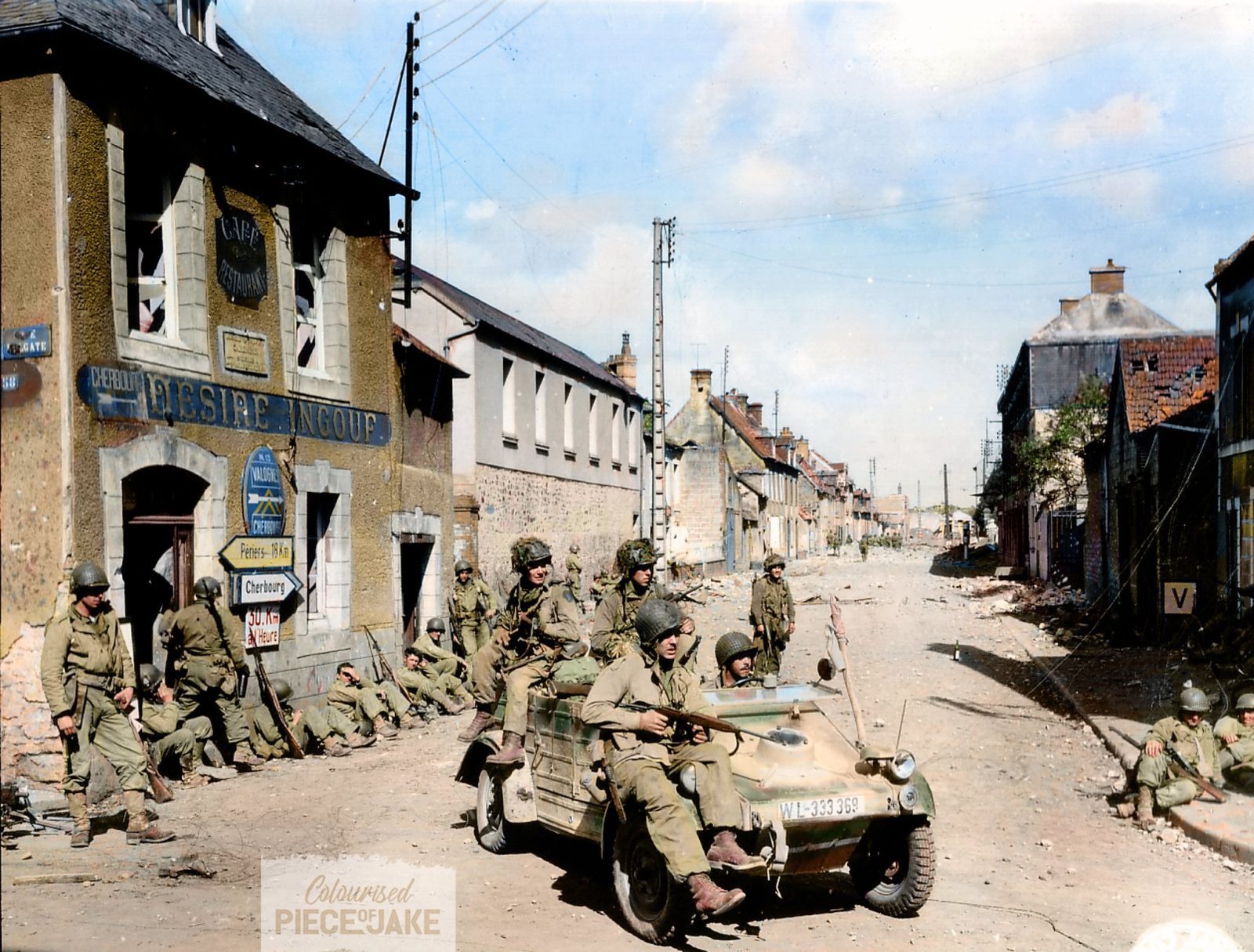 14 June 1944. “Screaming Eagles” in a German VW type 82 ‘Kübelwagen’ at the crossroads of the street (Rue) Holgate and the Route National no.13, Carentan, Normandy, France.

It took six days of bitter fighting to liberate the town and ensure the junction between the landing beaches of Utah Beach and Omaha Beach.
The town of Carentan, surrounded by marshes, was known to be the only crossing point and as a vital strategic location had to be swiftly taken.

On 6th June 1944 , sirens, alarms, patrolling aircraft and defensive fire from the Germans left little respite to the inhabitants . Shortly after midnight , an unusual rumbling was heard heading towards the Baie des Veys. In the sky, carrier aircraft towing gliders were dropping paratroopers over the marshes and threw the Germans into a panic.

Around 4:30 am , the first Allied bombings began over the town. The aim was to destroy the railway line and all the bridges, particularly on the N13 road. The 501st Regiment of the 101st Airborne Division, commanded by Colonel Johnson, captured the locks at “la Barquette”. The position was held with great difficulty.

During the following night, further shelling by the naval artillery destroyed several buildings, which had previously been evacuated.

The 8th June 1944 was a little quieter, although hardly reassuring for the inhabitants.

On 9th June 1944, the American artillery shelled the districts of le Haut Dick, the harbour and the church. German guns based in Rougeval retaliated. Luckily, there were no casualties because people had remained hidden all day in their cellars.

On the night of 9th to 10th June 1944, the Allies managed to make their way to Les Ponts d’Ouve, situated only 2 km from Carentan, a key position for the U.S. Army . The only access to the town was via the N13, which dominated the flooded marshes and offered no protection. There were four bridges to cross. With the help of the American artillery, Colonel COLE and his GIs were able to cross the bridges.

German troops were ordered to hold their positions at all costs. There were heavy losses on both sides. American and German soldiers were so close to each other that they could hear their enemy speak and cock their weapons. There were dead bodies everywhere and the wounded could be heard calling for help.

Colonel COLE decided to put an end to this situation. Under the cover of a smoke screen, he ordered the assault. The GI’s hidden behind garden hedges and in a vegetable patch (“le Carré de Choux”) received their orders. They hurled into the attack, and charged furiously with fixed bayonets. They fought hand to hand and drove the enemy beyond the village of Pommenauque.

The Germans attempted several counter- attacks but faced the resistance of the Americans, they abandoned the area completely. The 502nd PIR was too exhausted, and could not continue their progression; the 506th took charge. On 10th June 1944, the town of Carentan was once again under violent artillery fire. The sound of shooting and machine gun fire was approaching, particularly in the direction of Saint-Hilaire and Saint -Côme-du-Mont.

The 327th and the 401st Glider Regiments crossed the canal in Brévands without much resistance. Then they went over the river Taute in Saint–Hilaire, crossing a footbridge, which the soldiers had repaired as best as they could.

On 11th June 1944 , the American artillery was unleashed . The bell tower and the church choir were destroyed; the Gloria factory was ablaze, as well as houses in rue Holgate. The noise of battle was deafening.

The 506th regiment, which had remained near Saint-Come-du-Mont, pushed on to the Carteret railway line, reached Auvers and then the road to Périers, at the “Billonnerie” where they met with the 501st Regiment.

On June 12th 1944 at dawn, large forces converged on Carentan. The Germans had retreated during the night. General TAYLOR and Colonel HARPER entered the town.

After 6 days of fierce fighting and the loss of half of its numbers, the 101st Airborne Division opened the road to Victory for the U.S. Army with the capture of Carentan.