Army Futures Command (AFC) is bolstering dismounted Soldiers’ power capabilities by developing integrated, flexible cables for a new generation of modernization priorities. Enhanced Soldier maneuverability and mobility on the battlefield are among the initial improvements resulting from new cables that will be incorporated into a tactical vest, according to Combat Capabilities Development Command (CCDC) researchers. 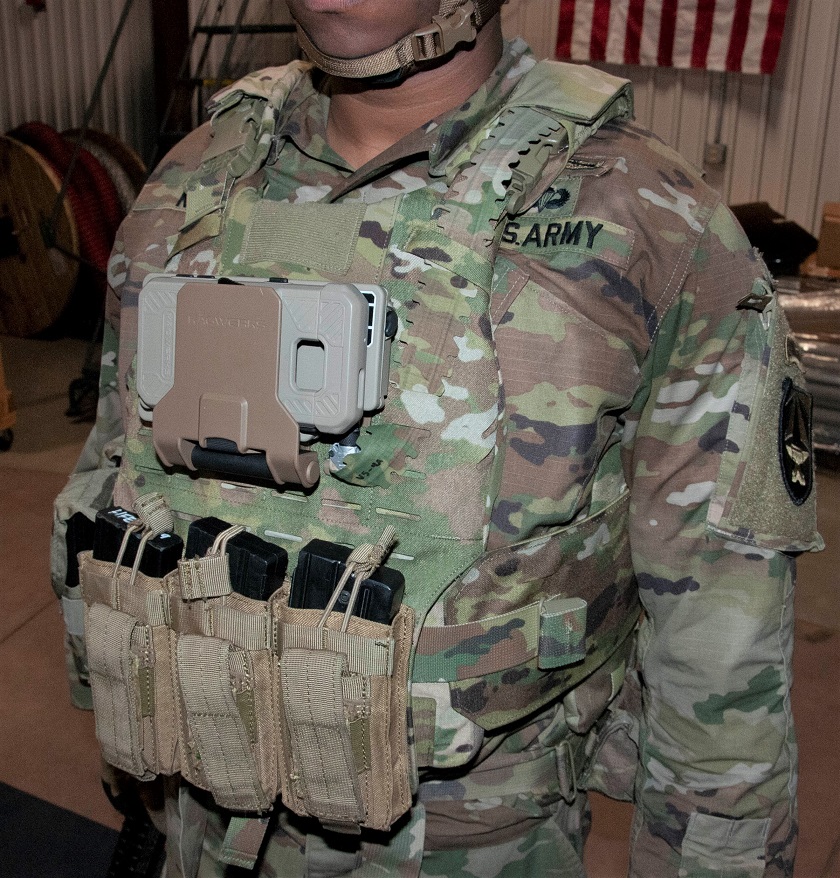 As the Army increases the number of electronic devices that Soldiers need to carry, more cables are required to connect equipment to power sources and share data. In addition, the Army’s modernization initiatives will demand continually increasing rates of Soldier-worn power. The integrated cables are one solution researchers are developing for a holistic approach.

“This new flexible cable is up to 50 percent lighter than the legacy version,” said Ethan Wise, a C5ISR Center electronics engineer who is leading the project. “It’s much more flexible, less bulky and removes cabling that encumbers a Soldier’s motion when connected to a Conformal Wearable Battery. It reduces snag hazards because it can be looped through a tactical vest several times. The new cable feels like the fabric of a standard Army uniform and blends in seamlessly with the camouflage pattern.”

A United Kingdom company initially developed the new cable, and the U.S. Army has been investigating its potential uses through the Foreign Comparative Testing (FCT) Program. The FCT works with Army science and technology organizations to find and evaluate solutions to meet the operational needs of U.S. Soldiers regardless of the technology’s country of origin.

The FCT Program initially focused on the Nett Warrior system, and the CCDC team is now leveraging that science and technology knowledge for high-priority programs such as NGSW and IVAS.

IVAS is a Microsoft-designed heads-up display that functions as a fight-rehearse-train system, among other roles. Its high-tech features, such as augmented reality and aided target recognition, will require continuous power loads for extended time. Flexible cables are a potential fit for IVAS power delivery, Wise said.

For the NGSW program, researchers are investigating a rifle sling composed of materials similar to those used in the new cables, according to C5ISR Center research mechanical engineer Dr. Nathan Sharpes. The benefits would include reduced battery weight on the weapon, more flexibility and greater run times.

In addition to the sling, Sharpes and his colleagues are prototyping new ways of storing energy and routing power on the weapon. These features collectively give the Soldier options to power weapon-mounted enablers to meet changing mission requirements.

“These new weapons will be equipped with sophisticated technologies, likely requiring more power,” Sharpes said. “The straightforward solution would be to tether the weapon to a larger battery on the vest. However, this introduces a snag hazard and historically hasn’t been popular among Soldiers. Routing power through the sling should yield a more acceptable and familiar-feeling solution.”

C5ISR Center engineers will continue to work on prototypes throughout 2020 for potential use with IVAS and NGSW offices.