Anyone who’s familiar with the British Army and its infantry equipment knows that Squaddie slang for a rucksack is “bergan” or “bergen”. Most seem to also understand that this has some sort of Norwegian connection, but few seem to really understand what it’s about. So if you’re curious, read on…

As for the nickname, “Bergan” is an adaptation of the name of the Norwegian backpack manufacturer Bergans, and the alternative of “Bergen” appears to be a case of confusing the brand name with the town of Bergen, Norway. Understandable perhaps as the two words sound basically the same in English pronunciation. 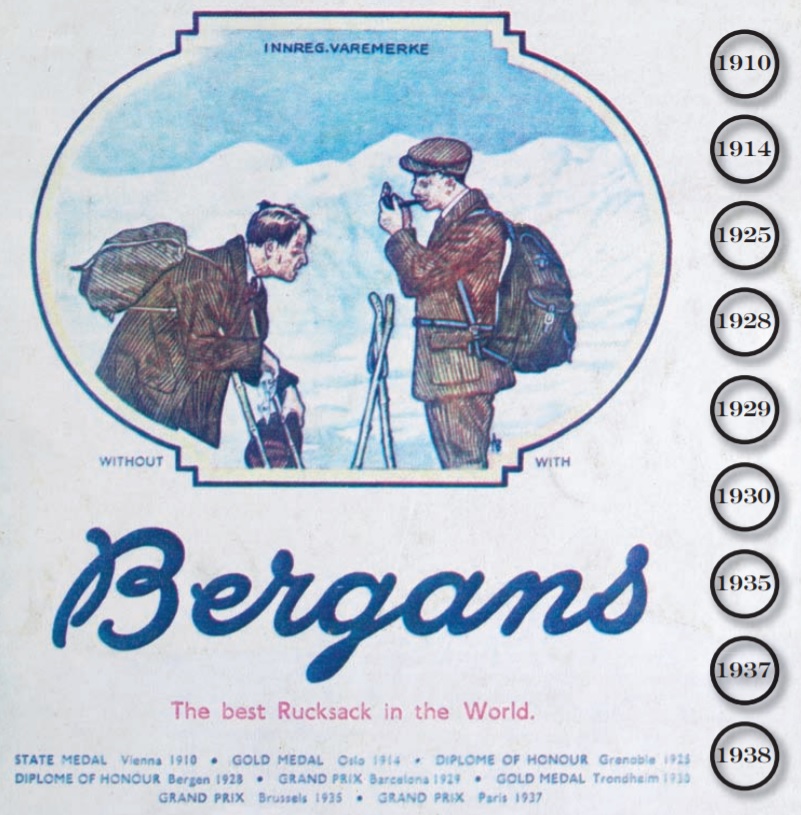 At any rate, according to official company history, designer and inventor Ole F. Bergans came up with the basic concept for a new backpack while on a hunting trip at Skrimfjellet in 1908. The story goes that “Ole bent a juniper branch, and shaped it to the back to give a comfortable fit, and to provide support for his soft sack. From this ‘prototype’ he developed the frame and replaced the branch with light tubular steel and straps. The basic idea was that the sack should be shaped according to the persons form and height, and that it should sit snugly to the body, whilst supporting the sack frame. This concept is mirrored in every modern anatomical rucksack produced today.”

The growing popularity of outdoor sports like hiking and mountaineering throughout the 1920’s and ’30’s helped fuel the rise of the Bergans brand-name to become virtually synonymous with “rucksack”. Bergans backpacks also caught the eye of various military forces of the time too. A consignment of Bergans rucksacks were sold to the Czechoslovakian Army in the 1920’s, and the influence of Bergans can also be seen in the design of the German Gebirgsjaeger (mountain rangers) rucksack used throughout WWII.

Bergans rucksacks were also well known to the mountaineers who played a key role in the training of British Commando troops in the Scottish Highlands during WWII. But as Norway was occupied by the Germans in 1940, it was impossible to procure genuine Bergans backpacks from the source, so the Commandos decided to create their own. The result was the rugged, comfortable, and capacious 1942-Pattern ‘Bergen’ rucksack that became very popular with the Commandos, the SAS, and the Airborne Forces of Britain throughout the war.

When the US Army needed a suitable rucksack for its fledgling mountain and special operations forces at the beginning of WWII, they also looked to the Bergans for inspiration. The 1942 and 1943  pattern US Mountain Rucksacks (official Quartermaster designations, J.Q.D. 88B and J.Q.D. 88F) clearly show the Bergans influence. In fact the US 1943 Rucksack looks like a virtual copy of the British ’42 Pattern Bergan. The US Mountain Rucksack was issued from 1942 until the late ’50’s / early ’60’s, although production was stopped in 1950.

By the 1970s the wartime Bergens were considered obsolete – a lack of waterproofness was one problem for example  – and once again, the Airborne, Commando, and Special Forces of the British Army needed a solution for carrying the larger loads they bore on their backs compared to standard motorised or mechanized infantry, and so the special SAS/PARA Bergen was developed in the early ’70’s.

This new SAS/PARA Bergen was constructed of very tough, waterproof, butyl nylon coated material, was mounted on a steel frame with quick release shoulder straps, and rode above the kidney pouches of the 1958 webbing rig. It could also carry up 125-Litres of kit.

The SAS/PARA Bergen’s expandable design enabled it to carry loads from 50-Litres to 125-Litres in capacity. However, it was always too heavy and cumbersome for smaller loads – and when loaded to full capacity it was also quite unstable and uncomfortable. Even though the SAS/PARA Bergen utilized the newer H-shaped frame that distributed weight more evenly along the vertical axis of body, the short length of the frame and the high center of gravity of a fully loaded pack made the load unstable and cumbersome. The Falkland Islands campaign in 1982 would finally show conclusively the many shortfalls of both the 1958 Pattern Webbing and the SAS/PARA Bergen.

However, before shipping out to the Falklands, many soldiers of Britain’s elite units did what their forefathers in WWII had done, they made a run on the mountaineering and long-distance hiking gear shops to buy a better and/or larger capacity rucksack than what they were issued with. One of the most popular types of rucksack at that time was the ‘Vulcan 100’ from British mountaineering company Berghaus – and they even helpfully offered it as standard in olive green color. The Vulcan also used an H-shaped frame design, but it was an adjustable, well-padded internal frame, and the layout of the pack distributed the weight more evenly and closer to the center line of the wearer’s body. The center of gravity was also lower and more balanced than the SAS/PARA Bergen, and the side pockets could even be zipped off and used together as a light patrol pack / 1-day pack.

So popular and successful was the Berghaus Vulcan, that when the British Army finally issued a major redesign and upgrade of individual soldier equipment in the mid-80’s – known as Personal Load Carrying Equipment (PLCE) – the set included a new, mountaineering-grade, 100-Litre rucksack that bore a remarkable resemblance to the Vulcan.

During ‘The Troubles’ in Northern Ireland throughout the 1970s and ’80s other problems with the standard 1958 Pattern load carrying equipment had come to light. The 1958 Pattern load-out still followed the sub-optimal basic concept of the Pattern ’37 and ’44 Webbing sets, and its complex system of increasing the load carrying capacity by strapping on kidney pouches, poncho roll, haversack, gas mask pouch, etc. left much to be desired in terms of comfort and ease-of-use. Vehicle and heliborne troops on quick reaction or snatch-and-grab duties in Northern Ireland particularly noticed how cumbersome and inflexible the ’58 Webbing could be.

Using a non-standard / non-issue chest rig with a separate backpack became the commonplace norm among light and mobile forces in Northern Ireland and on other Peacekeeping missions. But once again, the standard issue rucksack was not ideal for the requirement – as it was too large, too heavy, and too cumbersome. The so-called ‘Patrol Pack’ a medium-sized backpack that could carry enough extra food, ammo, water, and/or specialized equipment, foul weather clothing, or lightweight sleep system became the go-to solution.

Fast-forward to the present-day, and the Polish tactical and outdoor gear supremos at Helikon-Tex® are incorporating the design heritage and hard-won lessons of the classic British Bergen rucksacks into some of their latest products.

You’ll notice for example that their new Bergen Backpack® intentionally pays homage to the style / layout of the PLCE Bergen, but in a scaled down size. The Helikon-Tex Bergen however uses modern materials and construction to make it as lightweight and rugged as possible. With its 18-liter storage capacity, it’ll carry just enough for a 2-3 day trek for an advanced hiker or a single-day trip for novices. 3 outer pockets with pass-through slots makes it easy to spread one’s gear according to need or personal taste.

The Helikon-Tex® Bergen Backpack® will be available from Helikon-Tex and their dealers sometime later this spring. 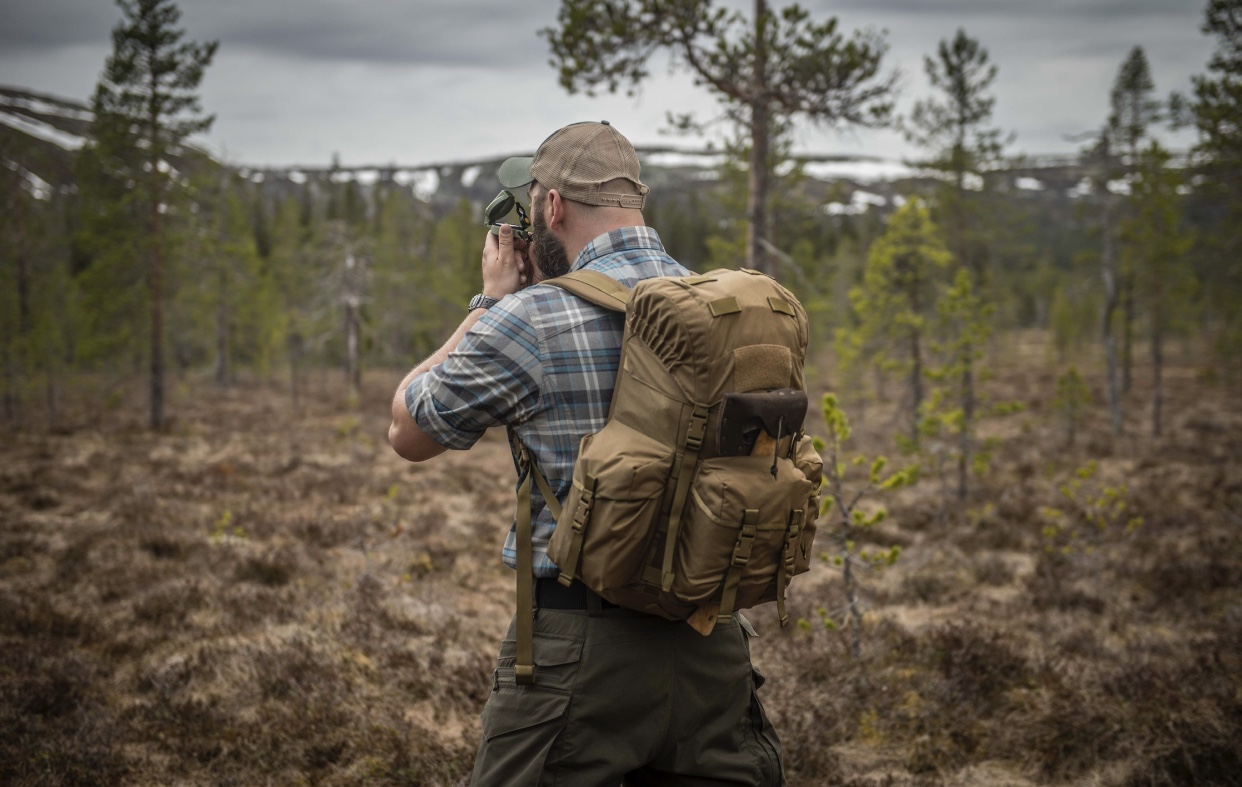 Meanwhile, its “big brother”, the Matilda Backpack®  has already been on the market for a couple of years and has developed an excellent reputation and a loyal following.