On September 17th 1944 the then largest airborne operation, by Allied Forces, of the Second World War was launched. Three airborne divisions and an independent brigade would take part in the air side of operation ‘MARKET-GARDEN’, which would take place in Holland. The 101st U.S. Airborne Division would land the nearest to the Dutch/Belgium border, in the south, near Eindhoven, the 82nd U.S. Airborne Division would land in the middle, near Grave and Nijmegen, and the British 1st Airborne Division, supported by the 1st (Independent) Polish Parachute Brigade would land the furthest north at Arnhem.

Altogether it was intended to land 35,000 men by parachute and glider over a three day period and try and finish the war by Christmas. This is what would become known as ‘The Battle of Arnhem’. 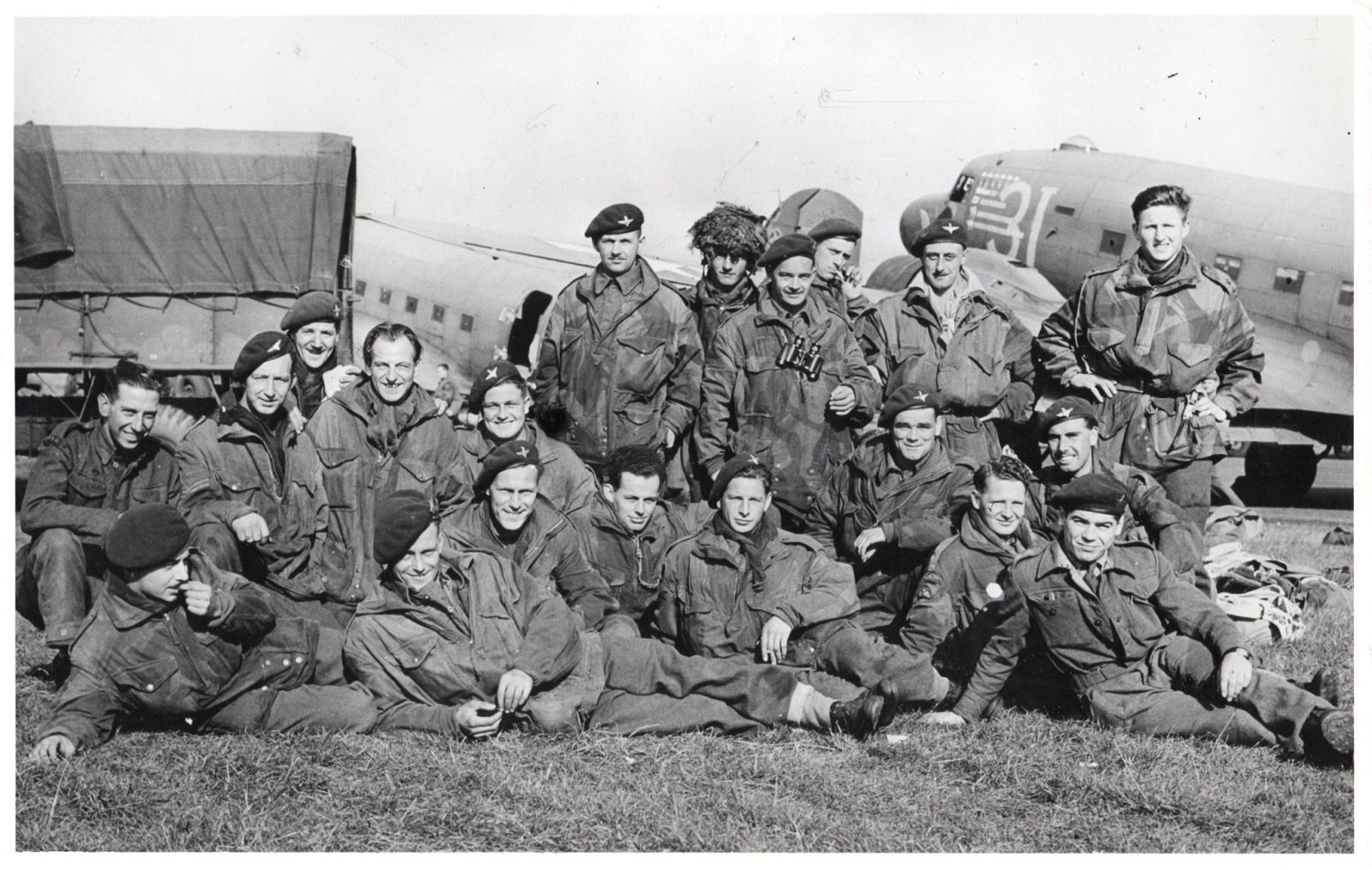 The First Lift of the British 1st Airborne Division took off from various airfields spread from Lincolnshire, to Dorset, and Gloucestershire to Kent. The parachute element consisted of the 1st Parachute Brigade, and support elements, and the glider-borne element was mainly the 1st Air Landing Brigade and some Divisional Units, such as the 1st Airborne Reconnaissance Squadron.

The aim was for the Reconnaissance Squadron to ‘dash’ to the main road bridge in Arnhem, and hold it until the three Parachute Battalion’s of the 1st Parachute Brigade marched from their Drop Zone to reinforce them. The Airlanding Battalion’s would defend the DZ ‘s and LZ’s for the Second Lift. 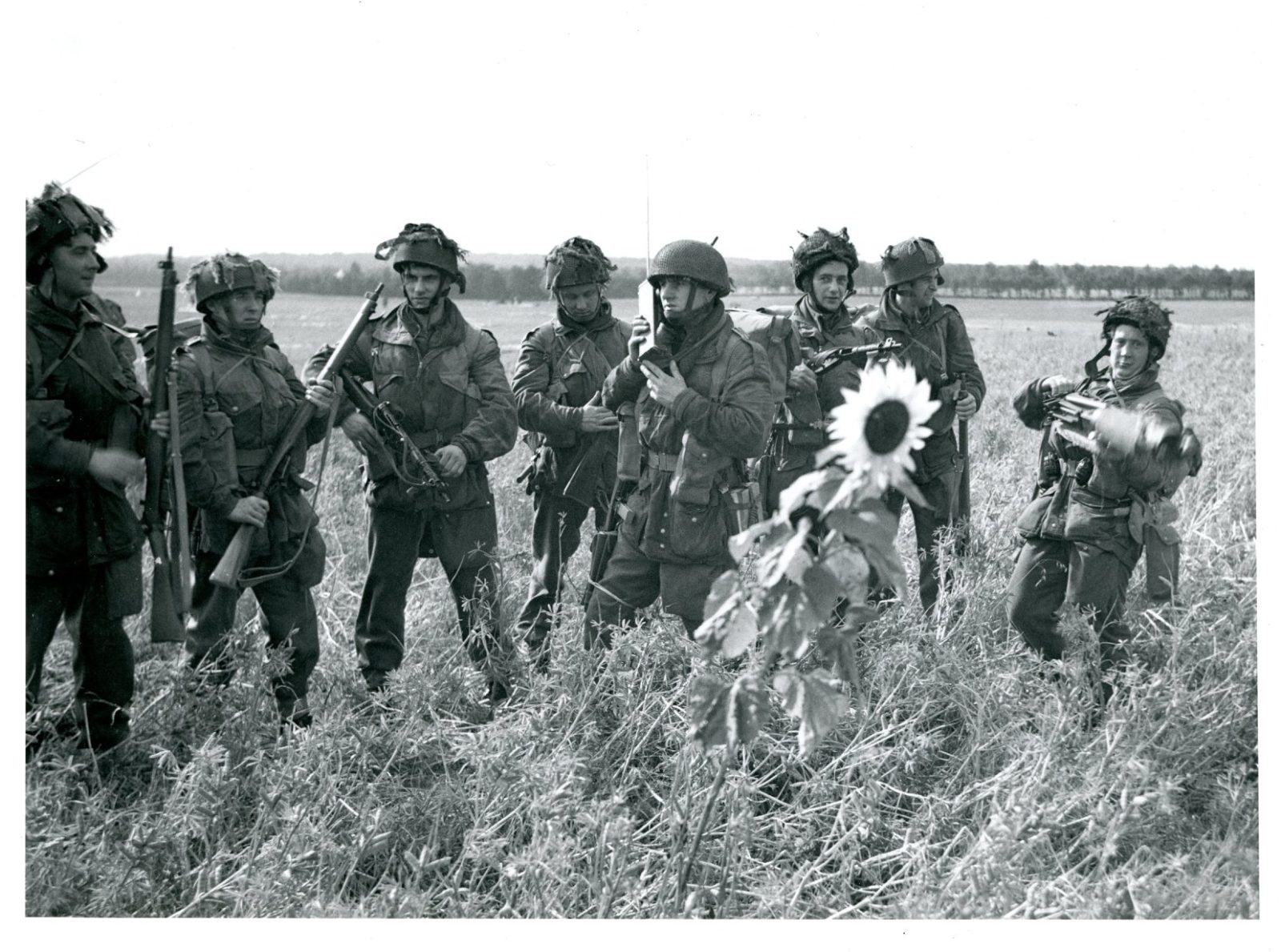 Photo Details: Usually misidentified as Airborne signallers, this is a group of the 1st Battalion, The Border Regiment at the edge of D.Z. ‘X’, mid way between Sinderhoeve and Jonkershoeve, looking south towards the Klein Amerikaweg. Second from left is a Sergeant, fifth from the left is an Officer and on the right the soldier is hoisting a Vickers MMG onto his shoulder. Sunday, 17th September 1944.  Photo by Sgt. M. Lewis, AFPU.

German resistance on the first day was stronger than expected and only the only 2nd Parachute Battalion, under the command of Lieutenant Colonel John Frost, got through to the main objective along with elements of other units. The Divisional Commander, Major General Urquhart, and Brigadier Lathbury were both missing, so command was now in the hands of Brigadier Hicks of the 1st Air landing Brigade. He was still out at the Landing Zone area and decided to reinforce the attempts by the 1st and 3rd Parachute Battalions trying to break through to the Bridge defenders.

Brigadier Hicks ordered the 2nd Battalion, The South Staffordshire Regiment to leave their positions around LZ ‘S’ and move immediately. They would be joined by the 11th Parachute Battalion, once they had landed on this day. 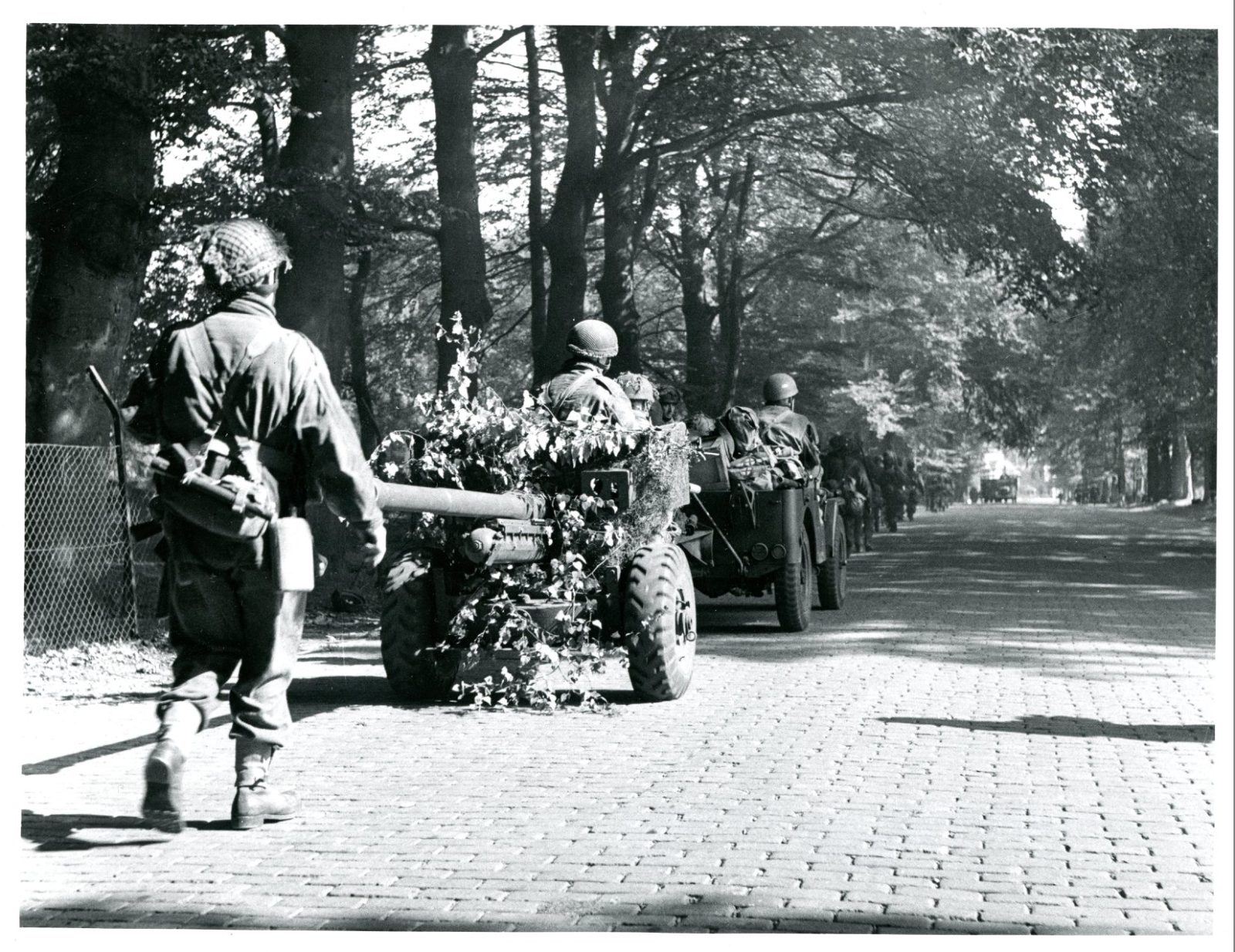 The attempts, in the town of Arnhem, to fight through to the British Force holding the northern end of the main road bridge had failed, and the survivors fell back to the little village of Oosterbeek. The units which had been defending the DZ’ s and LZ’s had now moved towards Oosterbeek as well, having been almost overrun trying to defend Landing Zone ‘L’ for the Polish Glider Lift.

The first of the many brave attempts by the Royal Air Force to resupply the 1st Airborne Division now took place, flying through an ever increasing anti-aircraft defence that the Germans were moving into position. 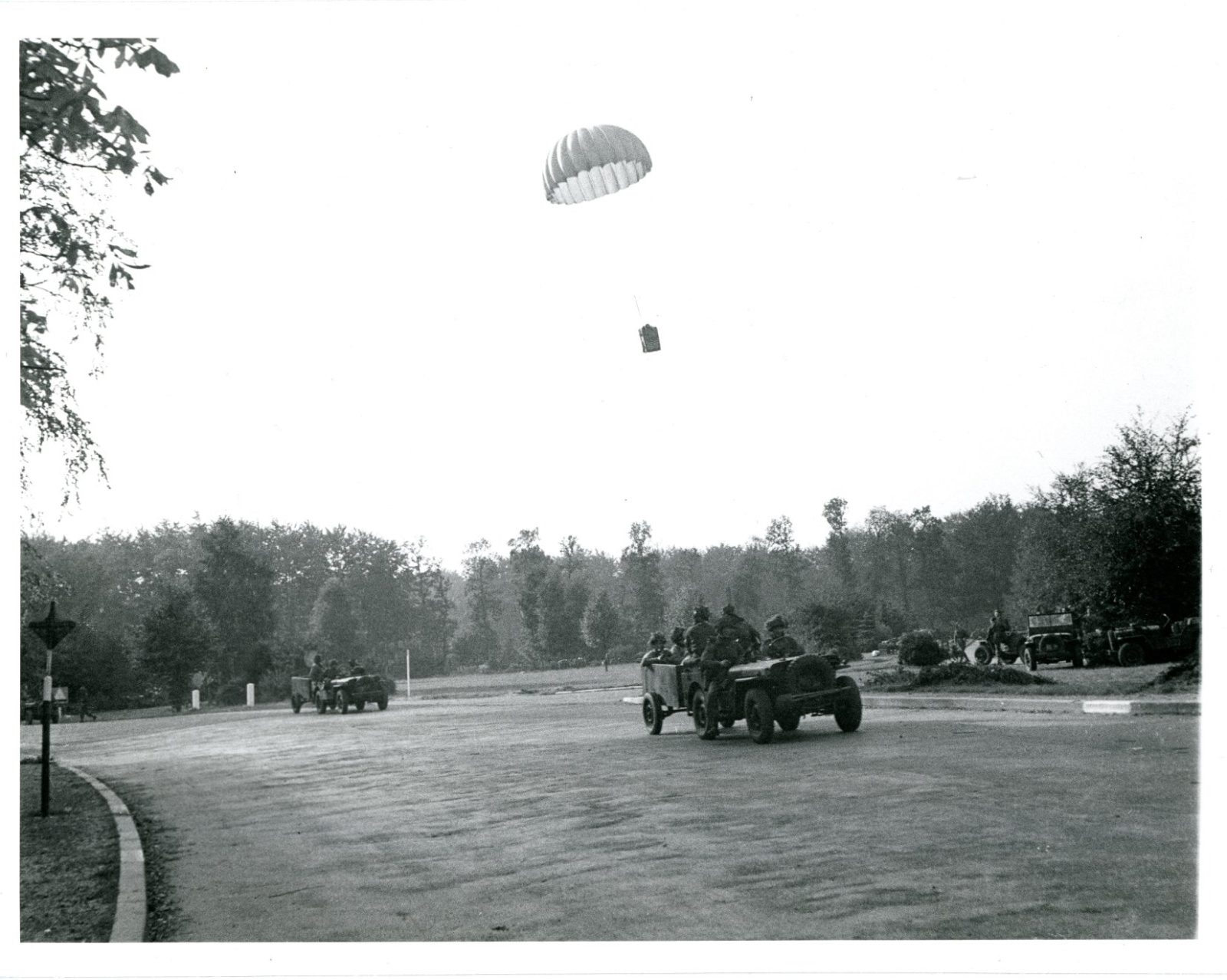 Photo Details: Tuesday, 19th September 1944. A supply container dropping on the green opposite the Hartenstein, whilst jeeps of the 250th Light Composite Company, R.A.S.C., under the command of Captain ‘Paddy’ Kavanagh, drive past on their way to the S.D.P. In the background on the right is the Divisional Maintenance Area, set up by the R.A.S.C. and the 1st Airborne Ordnance Field Park, R.A.O.C.
Photo by Sgt Dennis Smith, AFPU.

The 1st Airborne Division has now been forced onto the defensive, as they are completely surrounded in a small area on the northern side of the Lower Rhine at the village of Oosterbeek. This became known as the Oosterbeek perimeter, and was an attempt to try and hold a bridge-head for the British 2nd Army to cross over to.

Most of the positions taken up by the units would be held from now, until the end, with very little ground given up to the Germans in their continual attacks upon them. 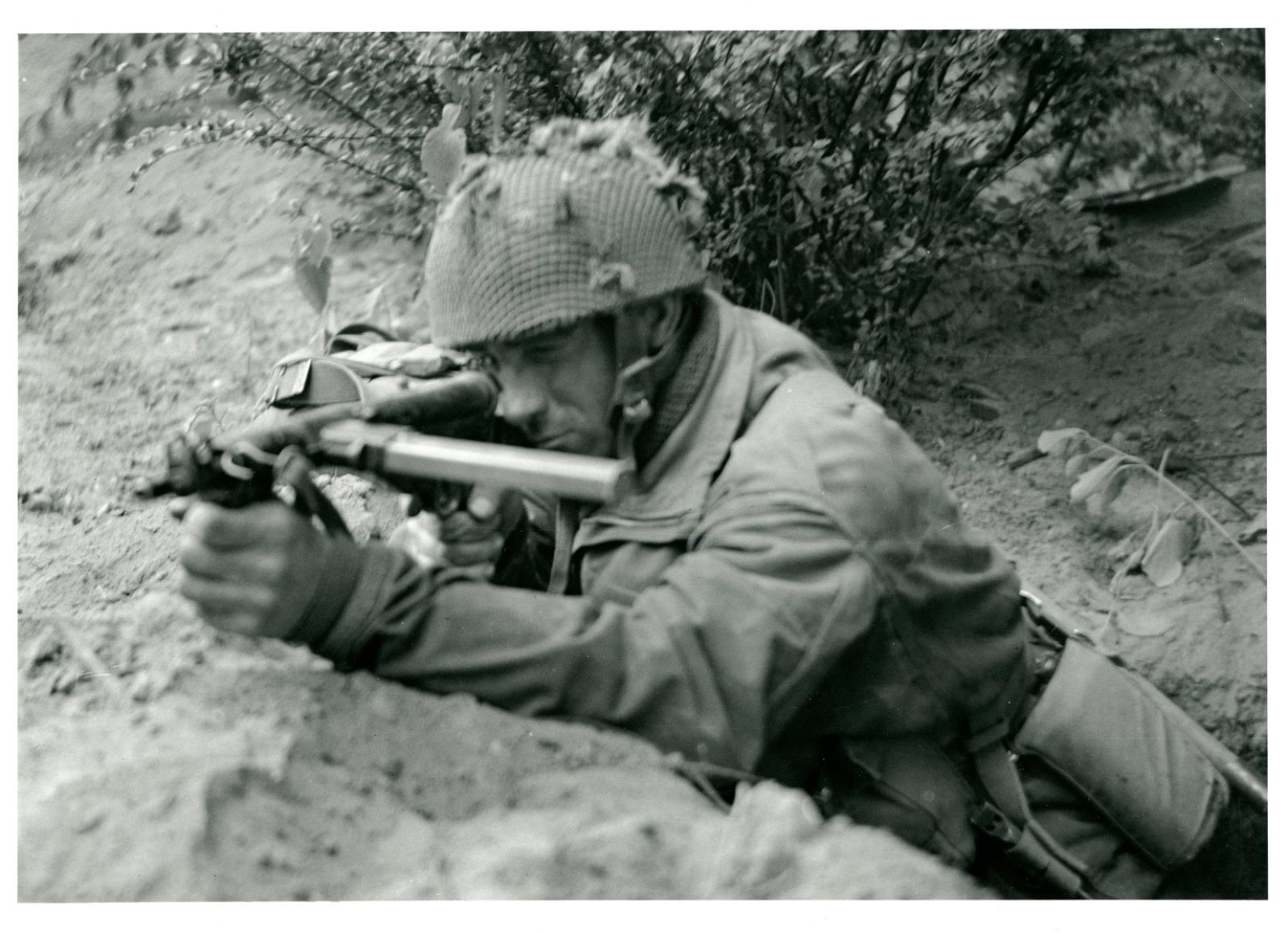 The 1st Airborne Division’s perimeter is holding firm, on all side, but is under pressure from tanks and assault guns, supporting S.S. Panzer Grenadiers. They are backed up by ferocious barrages from mortars and artillery of all calibres from 20mm to 150mm.

Movement in some of the forward positions is becoming difficult during daylight. In the afternoon part of the 1st (Independent) Polish Parachute Brigade drop on the southern side of the Lower Rhine, near the village of Driel, and attempt to link up with the Division north of the River. 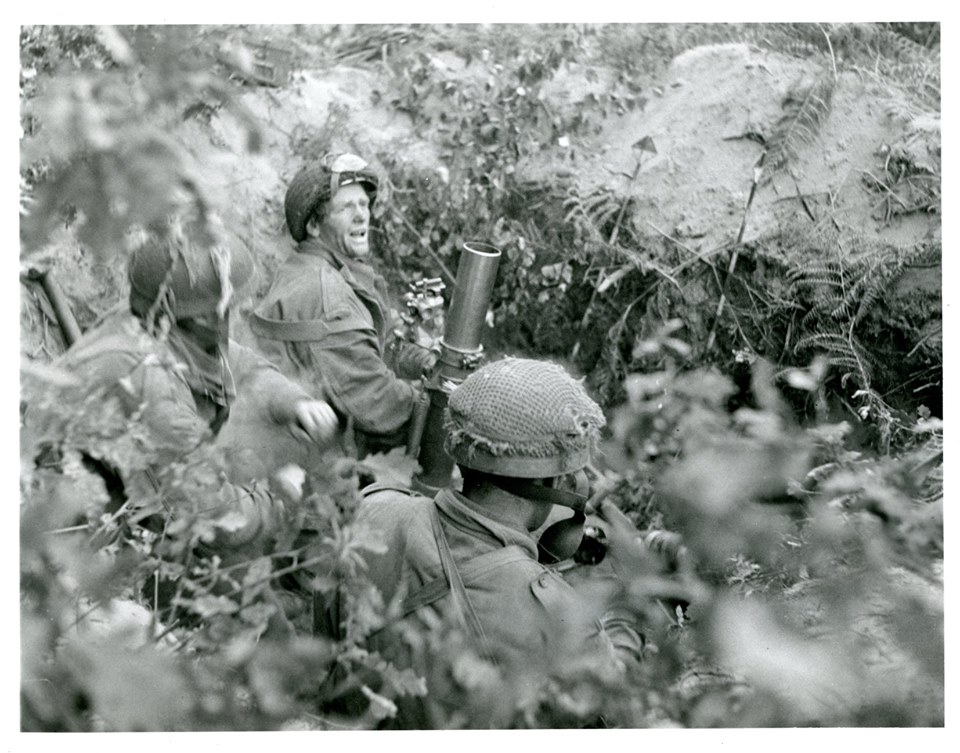 The first attempts to get the Polish paratroopers across the Lower Rhine into the Oosterbeek perimeter, have not been completely successful, and only a few men are able to move into the northern part and assist in continuing to hold the positions.

All troops are now dug-in, or have put buildings into a state of defence, and there is almost no resupply. The number of wounded in various Aid Posts around the perimeter is nearly a thousand, and the situation for them is desperate. 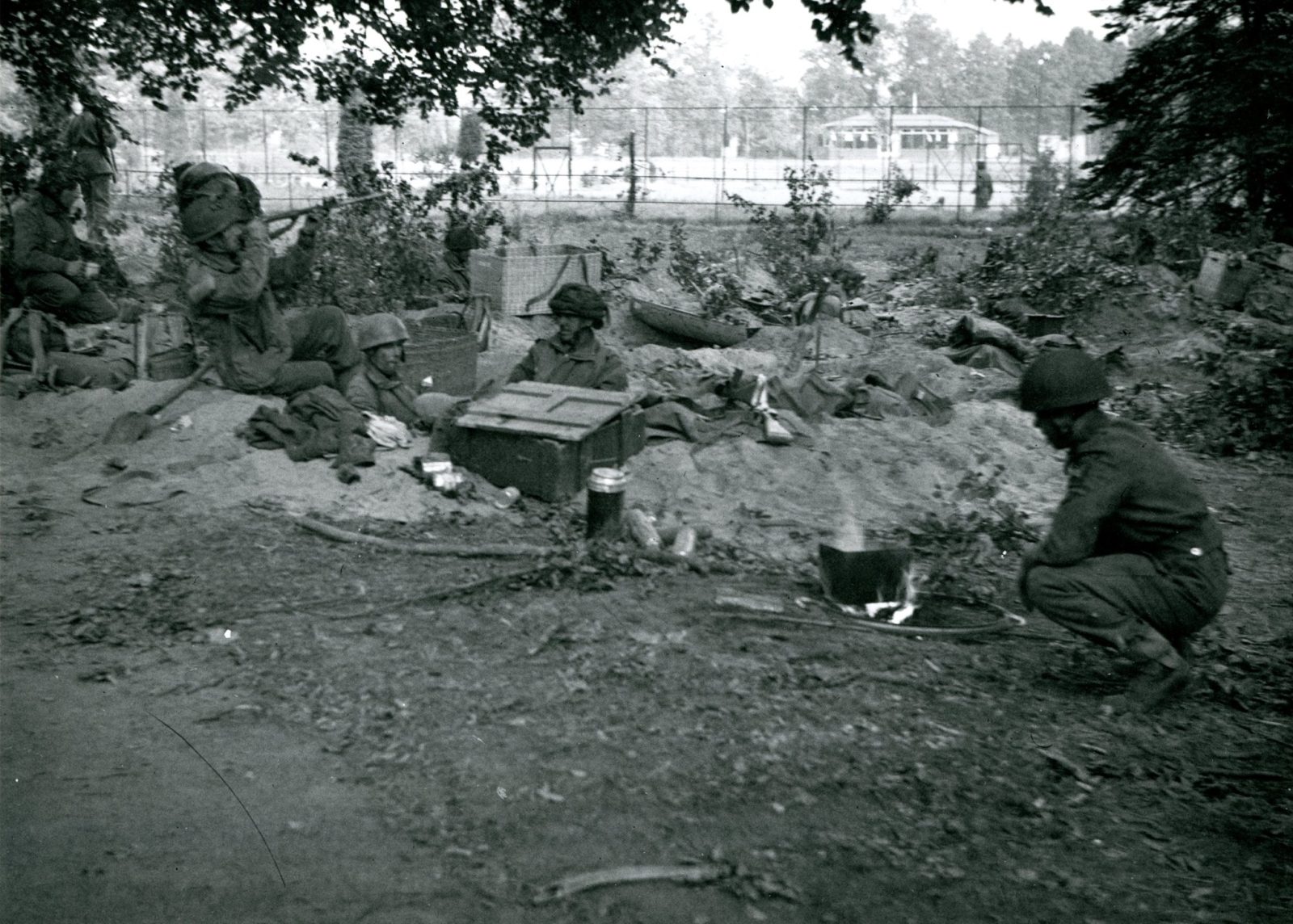 Squadron Sergeant Major Watt, HQ, B Squadron, 1st Wing, Glider Pilot Regiment, takes aim with an American M1 carbine from the first floor front balcony of the Hartenstein Hotel, Oosterbeek, near Arnhem in The Netherlands.  The British 1st Airborne Division headquarters had been established in the Hotel during ‘Operation Market Garden’ and it is now the Airborne Museum ‘Hartenstein’.

Sergeant Dennis Smith (who took the photo), wrote: “We have had a very heavy shelling this morning, September 23rd and now the situation is serious. The shelling is hellish. We have been holding out for a week now. The men are tired, weary and food is becoming scarce, and to make matters worse, we are having heavy rain. If we are not relieved soon, then the men will just drop from sheer exhaustion”.

Squadron Sergeant Major Watt escaped back to the UK across the river. He was posthumously awarded the US Bronze Star in January 1947 for his actions. 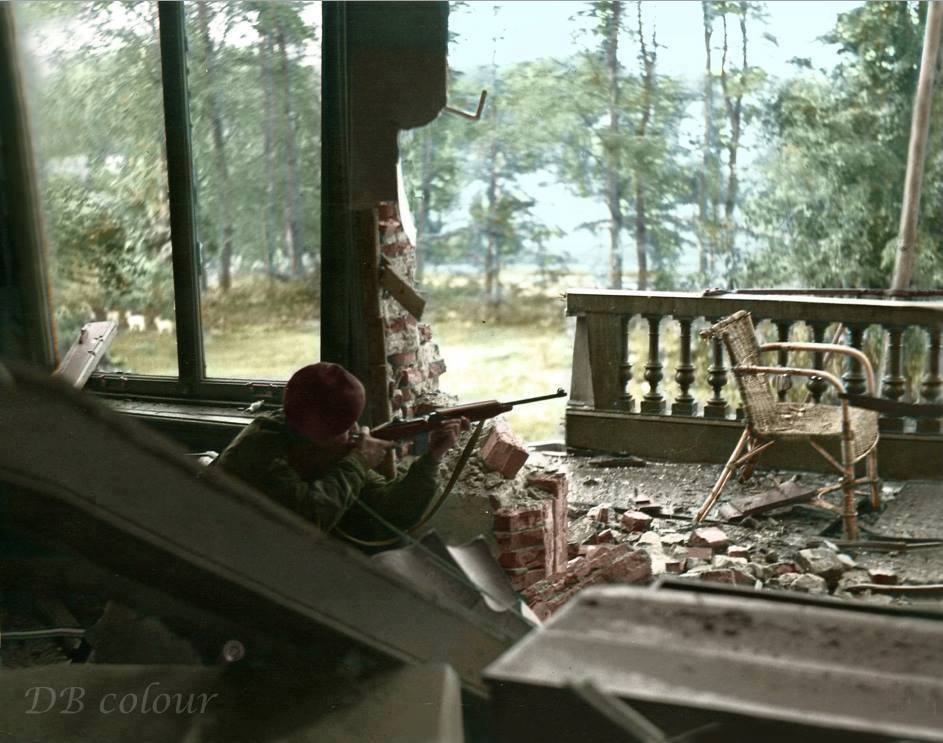 Trooper Edmond was a member of the Royal Armoured Corps, commanded by Major Freddie Gough. The squadron’s job was to land by glider near Wolfheze on September 17, 1944, then dash to and seize Arnhem Bridge in their specially armed jeeps. Trooper Edmond was shot by a German sniper as the squadron advanced through Wolfheze. Shot in a lung, his last reported words were: “Tell my wife I love her and go and see her.”

In 1945, he was re-interred at the nearby Oosterbeek Airborne Cemetery in the Netherlands – where annually since that year, Dutch school children have laid flowers on all 1,750 graves every September. 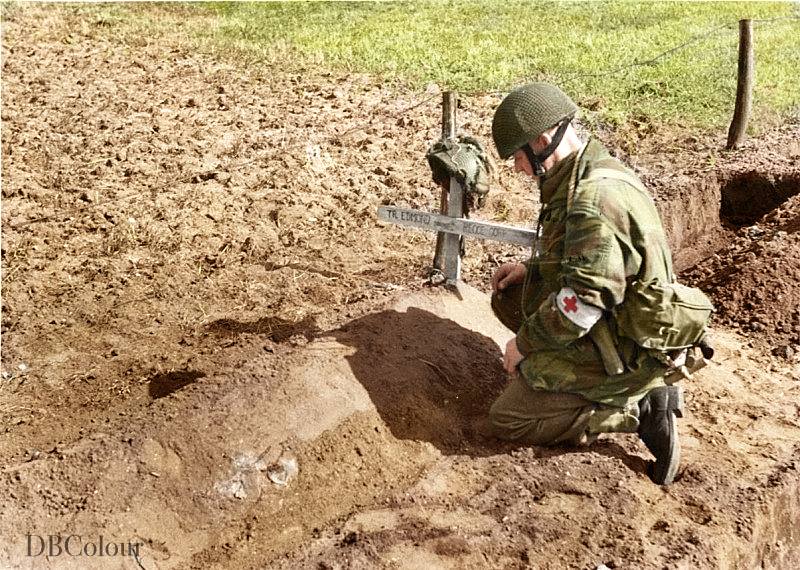 Operation Berlin (25–26 September 1944), evacuation of the surviving troops from Arnhem. The aim of the operation was to withdraw to safety the encircled remnants of the British 1st Airborne Division, while being covered by the 1st Polish Parachute Brigade. The surviving glider pilots laid a white tape through the woods leading from the Perimeter and the grounds of the Hartenstein Hotel, to the north bank of the Neder-Rijn (Lower Rhine) where the Royal Canadian Engineers were waiting with small boats to ferry them across the Rhine to a landing point north of Driel.

Of the original 10,095 men landed by parachute and glider at Arnhem, 2,500 were fighting capable on the night of the 25th. Of these, 2,163 British, among them, 75 men of the 4th Dorsets, along with 160 Poles, made it across the Rhine and into the safety of Driel. Operation BERLIN rescued some 2500 airborne troops with the 23rd Field Company recovering the majority of the besieged paratroopers in approximately 150 boatloads. 23rd Field Company lost seven killed and 14 wounded while five were decorated for their heroic actions. 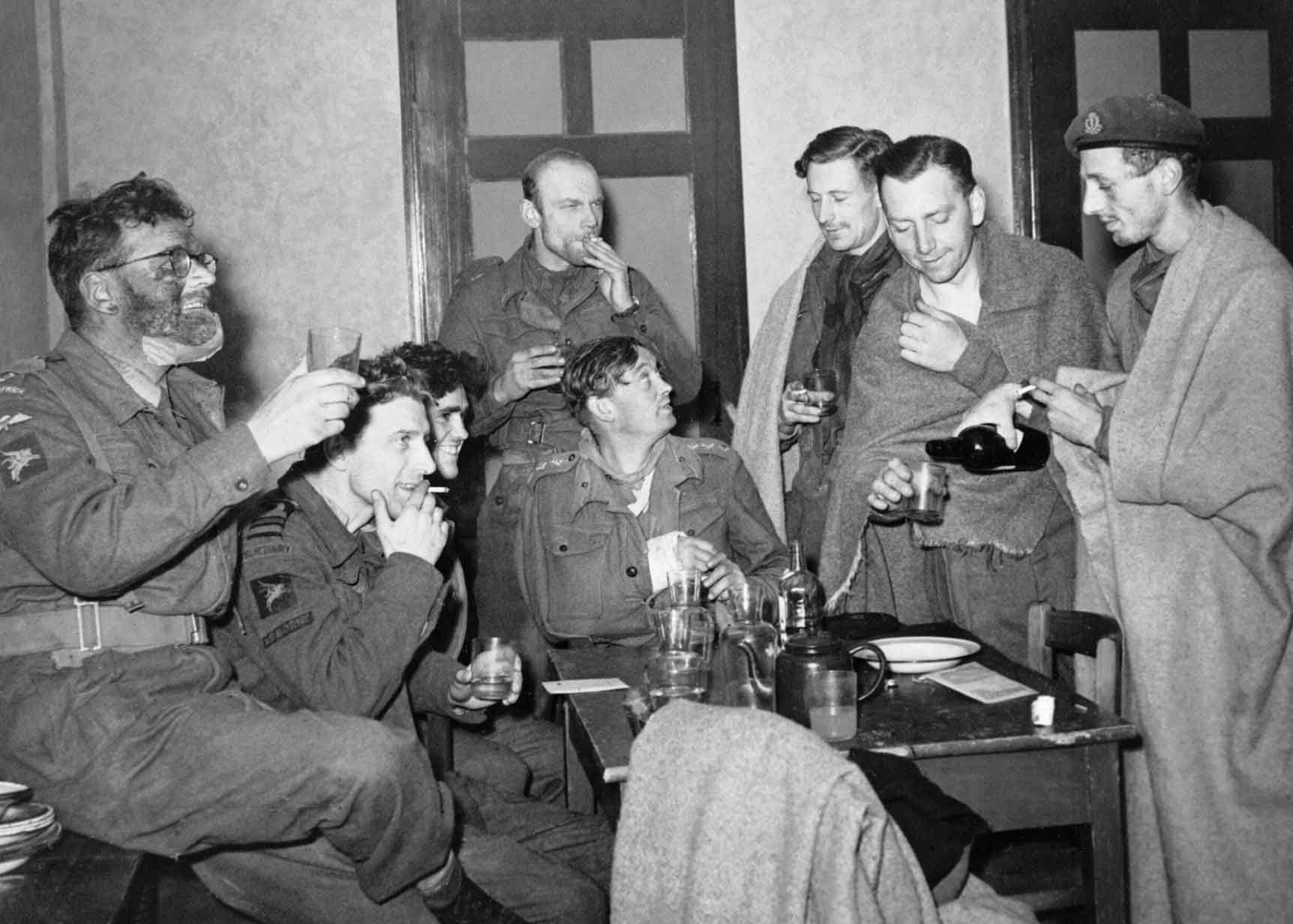 Photo caption: A group of survivors from the Arnhem Operation arriving at Nijmegen after the evacuation and having their first drink. One of them, Captain Jan Linzel (second from left) is a member of the Dutch Royal Navy attached to No 10 Commando.

Members of the British 1st Airborne Division (mostly 1st Bn. Borders), safe in the grounds of the Missionary College in Nijmegen, on Tuesday 26th September, after being successfully evacuated across the Rhine from Arnhem. 1st Border was part of 1st Airlanding Brigade – glider troops. Based in Woodhall Spa from Dec ‘43. 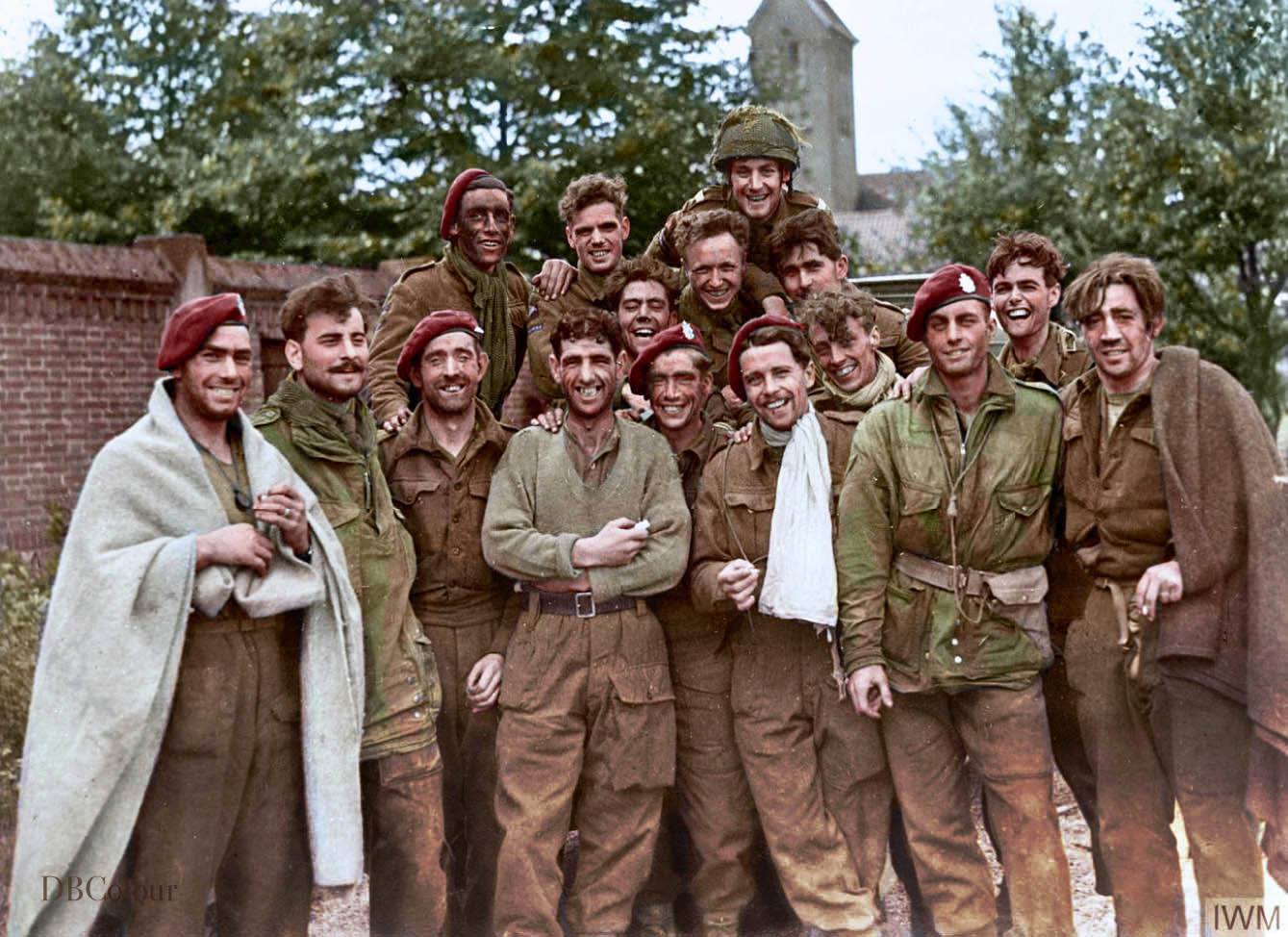 The three Army Film and Photographic Unit Photographers who took the graphic still and cine pictures of the 1st Airborne Division at Arnhem. The picture, which shows them with their cameras, was taken at the AFPU Centre at Pinewood Studios, Iver Heath, Buckinghamshire on 28 September 1944, the day that they arrived back. Smith was wounded in the shoulder. Left to right: Sgt. Dennis M Smith, Sgt. Gordon “Jock” Walker and Sgt. C M “Mike” Lewis. 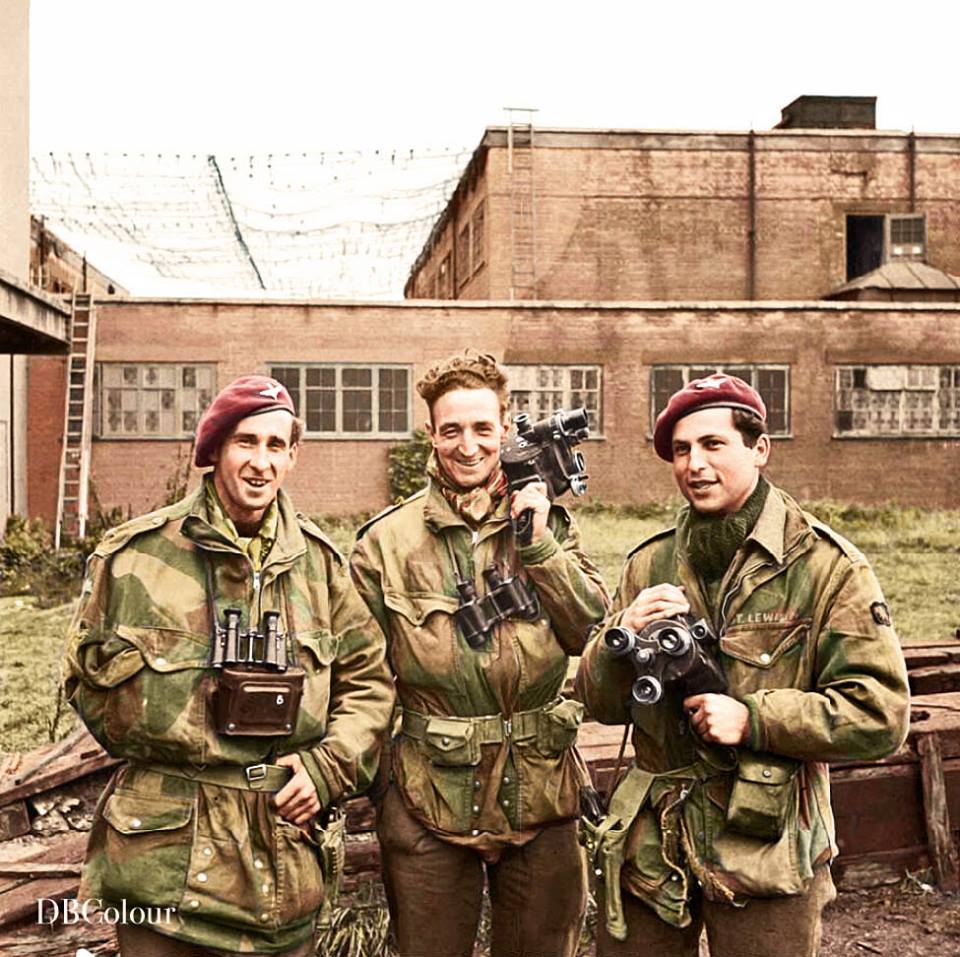