Anyone who’s watched “Band of Brothers” will know about the brutal defensive battle fought by American troops (who were largely caught off guard) in the Ardennes Forest of Belgium from mid-December 1944 until late January 1945. American forces bore the brunt of the attack, and the resulting bulge in their lines gave the battle its common nickname.  British and Commonwealth forces would also be thrown into the desperate fray before the end of battle.

This week marked the 75th Anniversary of the beginning of the battle that saw the American forces suffer up to 70,000 casualties. The German forces on the other hand suffered approximately 100,000 dead, as well vast amounts of weapons, machinery, vehicles and supplies. Although the war would drag on for several more months, and the Nazi hierarchy would resist to the bitter end, the Germans exhausted finally their ability to launch any more offensives in the snowy forests of Belgium.

The summer and early autumn of 1944 had been a busy time for the Western Allies. They had landed in Normandy, France in June, broken out of the beachhead and crushed the German Forces in northern France by the end of July.  Landed in Provence and liberated southern France, as well as Paris, by the end of August. And had pushed into the low countries and launched a daring airborne and ground forces assault to capture the bridges of southern Holland – ending with the desperate attempt to secure a bridgehead over the Rhine. All of this meant that by October, Allied forces were strung out from Normandy to the German border, and from the English Channel to the Mediterranean.

Due to the pace of operations and the more-rapid-than-expected advance across France, Allied forces in the West were over-stretched and under supplied, and many units were physically exhausted as well. Supplying all of these forces was a major problem as well – much of their food, fuel, ammunition, and medical supplies were still being trucked over from the beaches of Normandy. The deep water port of Cherbourg, France had been heavily damaged during the invasion in June, and the Dutch port of Antwerp (captured in late September) didn’t become operational until the end of November. For all of these reasons, Gen. Eisenhower called a halt to offensive operations in early October and order the Allied forces to hold up, re-group, dig in, rest and refit. The Ardennes Forest region was chosen as a rest-and-refit area that could be easily defended with a small number of front-line troops due to its rugged terrain. It was also chosen because Allied intelligence reported that the Germans were also this area on their side of the border as a rest-and-refit zone. The reality of course was that the Germans were in fact using that area to marshal their forces for the coming offensive.

By mid-December 1944 the Allies had 96 divisions at or near the front lines and another 10 Division en route from the UK. Meanwhile, the Allies elite Airborne units had been returned to the UK to receive rest, re-fit and replacements following their operations in southern Holland in late September. The German High Command on the other hand had 55, mostly under-strength, divisions on their Western Front. Hitler’s plan for the Ardennes Offensive included 18 infantry and 12 armored / mechanized divisions. It also counted on drawing 13 infantry divisions, two parachute divisions and six armored divisions from the combined German military strategic reserve. Hitler first officially outlined his rough plan for this counter-offensive to his surprised generals on September 16, 1944.

The overall objective was to execute a dramatic breakthrough of the Allied front lines where they were thinnest, race through to the Meuse River, and to retake the port of Antwerp and the Scheldt estuary that defended it. His intention was to split the British and American lines, encircle and destroy the cut-off Allied armies, and force Britain, France and the US to negotiate a separate peace treaty in the west so that the Germans could focus their efforts against the Russians in the East. After having survived the assassination attempt in July, Hitler had now imposed an iron grip and a reign of terror by the SS to such an extent that his remaining Generals appeared to willingly suspend any disbelief and go along with the fantasy. 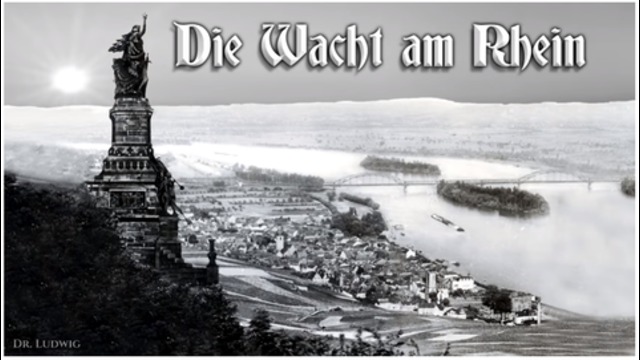 The code name chosen for the offensive was ‘Unternehmen Wacht am Rhein’ (Operation Watch on the Rhine). It was named after a patriotic hymn called “Die Wacht am Rhein” and appears to have been deliberately chosen as a means of deceiving Allied intelligence into thinking that the preparations were for the adopting of a defensive posture by the German forces along the Western Front to defend the homeland.  The operation is also sometimes referred to as “Die Rundstedt-Offensive” (The Rundstedt-Offensive, after its chief planner), and in modern-day Germany is often called “Die Ardennenoffensive” (The Ardennes Offensive). The nickname “the Battle of the Bulge” was coined by the press at the time as a descriptor of how the Allied front line bulged inward / westward on wartime maps. 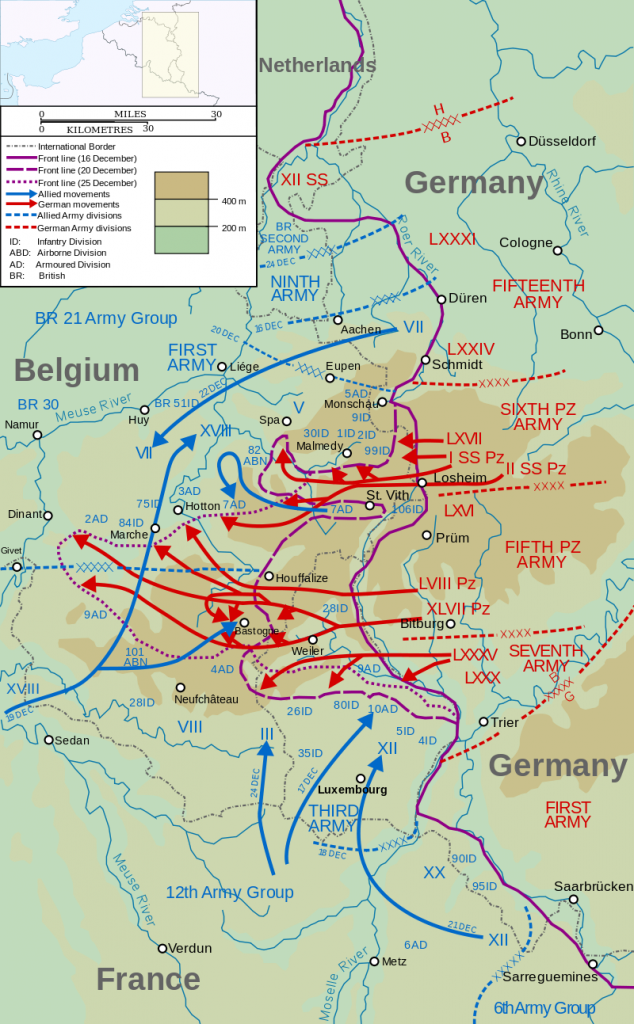 Thanks to the rugged, heavily forested terrain, low clouds and thick mists, and the home-turf advantage of being able to relay messages via telephone, telegraph and post, the Germans were able to largely keep their planning and preparations secret. They were also aided by the Allies being over-confident about the state of the German forces and capabilities, by the Allies being preoccupied with their supply problems and planning for their spring-time offensives, a lack of aerial reconnaissance due to bad weather, and by faulty assumptions about the disposition of forces on the German side of the lines. Thus, when the Germans unleashed their offensive on the 16th of December they achieved total and complete surprise – both tactically and strategically. The Germans were also able to utilize the mid-December weather to their advantage as well, launching their strike when the meteorological forecast promised them a natural cloak mist and rain that kept the superior Allied air forces on the ground during the critical first days of the operation.

The factors of total surprise, thorough planning, and the speed and fighting resolve exhibited by the spear-head German units did achieve some spectacular advances initial advances, and caused an unprecedented  level of panic and confusion among Allied leaders. Nonetheless, the legendarily stubborn resistance put up by the US 101st Airborne Division at Bastogne, the resolute defence of the Elsenborn Ridge by the US 2nd and 99th Infantry Divisions, and the inevitable fuel shortages and road blocks suffered by the German forces signalled the final predictable failure of the offensive.

The swift response of British Field Marshal Bernard Montgomery on the northern flank and Gen. George Patton’s breakthrough to Bastogne also began to turn the tables against the Wehrmacht. Between Between January 8 and January 16 the Allied armies concentrated their strength and pushed the Germans back across the border, and sealed the fate of the Third Reich. After the losses of men and materiel suffered in the Ardennes Offensive, Germany would no longer be able to offer any prolonged effective resistance to an Allied offensive. Nonetheless, it would take another 5 months of slogging forward mile-by-mile on both the Western and Eastern fronts before Hitler would be dead, Berlin would be captured, and the war would be over.

This week, and over the next few weeks, we will be remembering the Anniversary with a series of #Ardennes75 posts.