Operation Market Garden was the brainchild of Field Marshal Sir Bernard Law Montgomery, but planned primarily by Generals Brereton and Williams of the USAAF. The objective was to create a 64 mi (103 km) salient through German-held territory in the south of The Netherlands. It was to culminate with the capture of the bridge over the River Rhine at Arnhem, create an Allied invasion route into the industrial heart of Germany, and possibly end the war by Christmas 1944.

The advance got held up again however in front of the main highway bridge over the Waal River at Nijmegen. The Nijmegen Bridge was finally captured on 20 September in a two-pronged attack on both ends. The 3rd Bn. 504th Parachute Infantry Regiment of the 82nd Airborne Division made a near suicidal assault crossing of the Waal River in broad daylight to seize the north end of the bridge, while the 1st and 5th Battalions of the Coldstream Guards attacked the southern end. 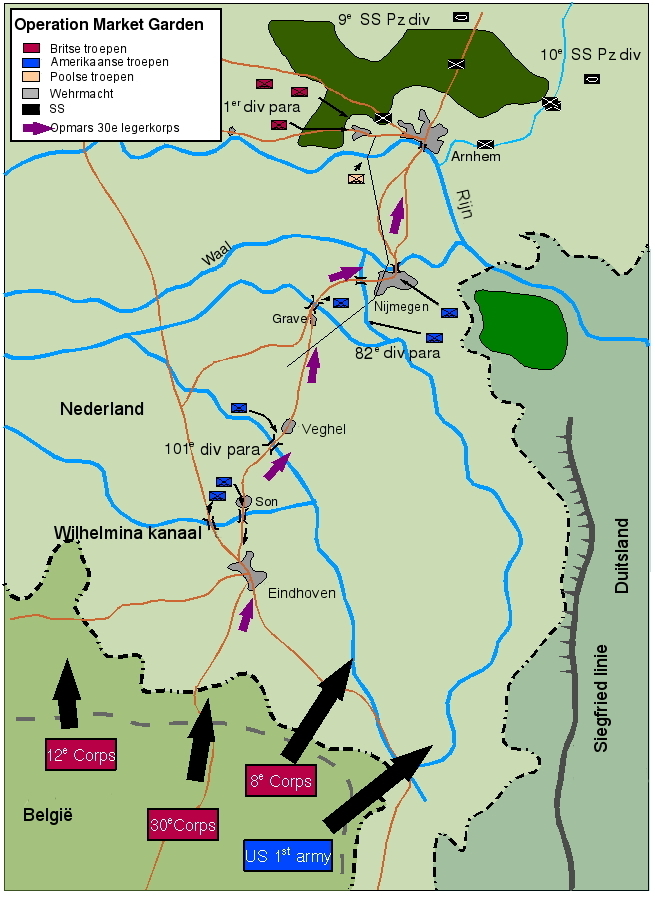 At the far end of the airborne operation, the British 1st Airborne Division encountered strong resistance right from the moment they landed – 8 miles away from the bridge. The distance that the Paras had to cover in order to reach their objective, plus the delays in the advance of the ground forces, gave time for the German forces defending Arnhem (consisting primarily of 2 SS Panzer Divisions) to organize a series of counterattacks. Although a small British force managed to capture the north end of the Arnhem road bridge, they were overrun on 21 September – just as XXX Corps’ tanks were finally rolling ahead over the Nijmegen Bridge – 36 hours later than planned. The British 1st Airborne Division was decimated in the fighting for the Arnhem Bridge, and on the 25th of September the survivors, trapped in a small pocket west of the Arnhem Bridge, were evacuated back to Allied lines.

Operation Market-Garden ultimately failed in its objective to cross the Rhine and strike into Germany’s industrial heartland – and possibly end the war by Christmas 1944. The Rhine River remained a barrier to the further advance of the Allies and the rest of 1944 was spent consolidating Allied positions and supply lines, finishing the liberation of Belgium and The Netherlands, and repelling the surprise German offensive through the Ardennes Forest in December. The Allies didn’t manage to actually cross the Rhine River and strike into Germany until March 1945.