We’ve been looking at HK’s 5.56mm rifles and submachine guns lately, but let’s now turn our attention to the heavy-hitters of the family, the 10- and 20-series light machine guns.

A popular concept in military firearms design, development and adoption from the 1950s up to the early 1980s was the idea of modularity and interchangeability of platforms at the squad level. The thinking was that a set of firearms with similar / identical controls, manual of arms, and interchangeable parts would make training and deployment easier and quicker – as well as simplify logistics and repairs at unit level. It certainly sounds good in theory, and looks great on paper, but as the ambitious Stoner 63 system showed, it is very difficult to make a firearm platform that works equally well as a carbine and belt-fed machine gun.

In HK’s case, they opted to go for commonality rather than 100% interchangeability. Whilst their rifles and light machine guns had a substantial percentage of interchangeable parts, the light machine guns were strengthened and optimized specifically to handle the more rugged firing conditions such a role demanded – much more so than the “automatic rifle” approach taken by others.

The HK13 (mag-fed) and HK23 (belt-fed) light machine guns (as shown above) are selective weapons that use a roller-delayed blowback operating system rather than a gas piston mechanism. The roller-delayed system was first developed during WWII by Mauser, and later perfected and implemented in the Spanish CETME rifle, and the famous HK produced G3 rifle in the 1960s.

This roller-delayed blowback bolt system was a hallmark feature of all of HK’s shoulder-fired small arms from the 1960s up until the G36 and XM8 programs of the mid-late 1990s. HK’s light machine guns of the ’60s, ’70s and ’80s adapted this successful and proven operating system into a series of 5.56x45mm and 7.62x51mm machine guns that were sleek, easy-to-operate, reliable, modular – and much lighter fully loaded than most of their competitors were when empty.

Now, before we go any further, let’s pause to look at the HK’s specific system of naming / numbering, as this will help to keep things clear going forward. The handy chart below explains it all, and was grabbed from a TFB TV video: 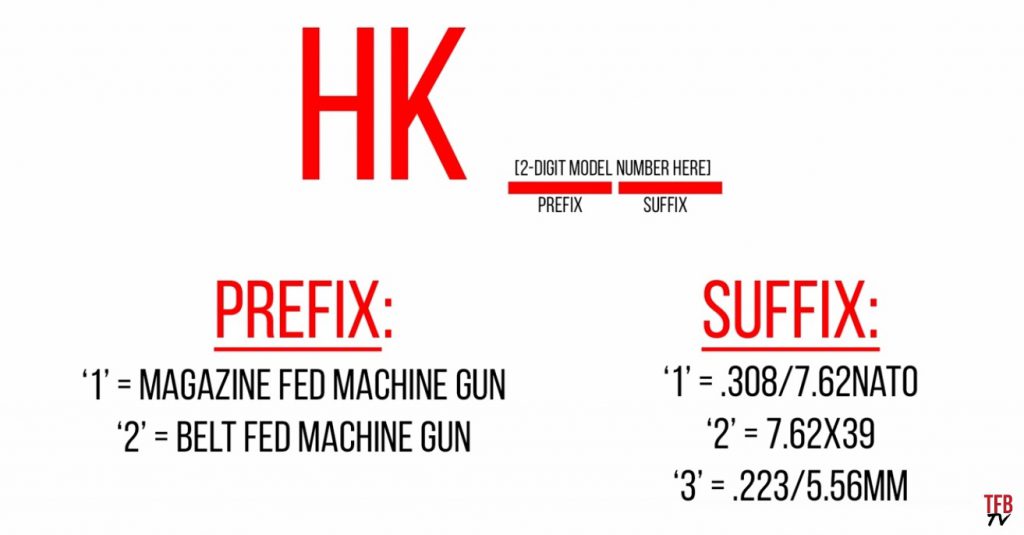 With this clarification in mind, we can immediately understand that the HK13 is a magazine-fed light machine gun in 5.56x45mm caliber, the HK23 is the belt-fed version, and that the same is true for the HK11 and HK21 in 7.62x51mm NATO caliber. It also worth noting something about the suffixes as well – “A” is an abbreviation of Ausfuehrung (the German word for ‘version’), and “E” is an abbreviation of Export (the German word for ‘export’). Thus, “A1” means ‘first version’, and the “E” models were variants that were prepared to HK-defined commercial standards, rather than the standards required by the German military.

Referring to the poster below, you can see that there are several noticeable differences between the early “A1” and later “E” models. This substantial upgrade reflected in the “E” models came about during the 1980’s when HK upgraded all of their light machine guns following military testing and user feedback. 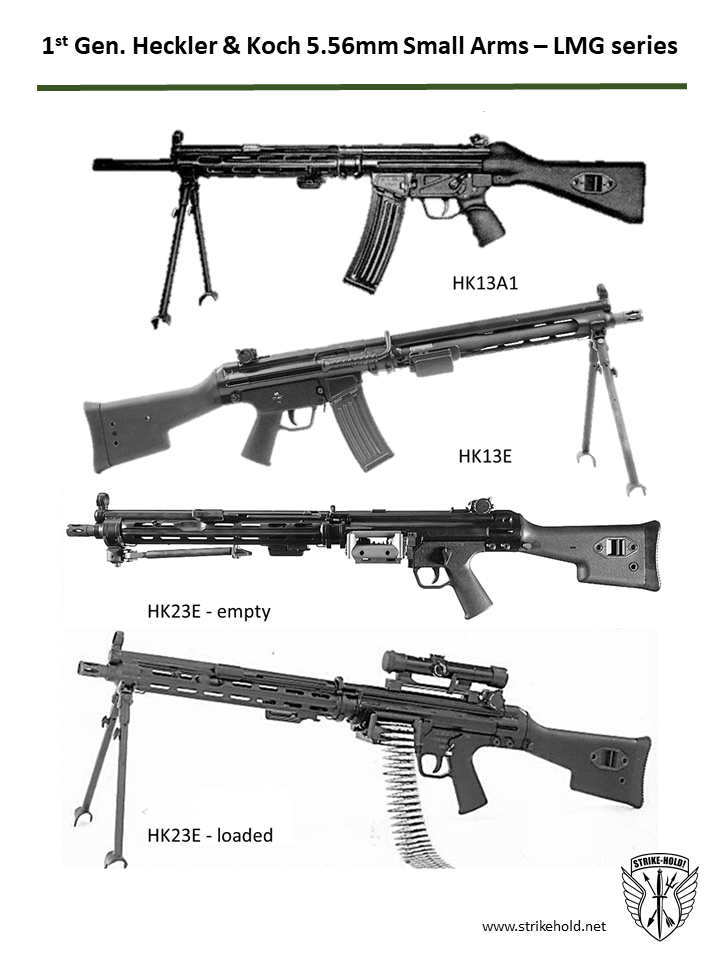 Specific improvements implemented in this mid-life upgrade for the “E” models included:

For an up-close look at the 7.62mm HK21E in use, check out the video below – to see how smooth the HK23E fires, click on this link to a TFB TV video:

Other improvements to the modernized “E” models included:

The end result was a ground-breaking modular family of machine guns that shared the same receiver, fore-end, and trigger group – and also had interchangeable barrels, bolt groups, feed trays / mag wells and return springs. With no special tools required, the user of the “E” model 20-series LMG could literally change between belt- or mag-fed configuration, and even between calibers, in a couple of minutes. That was a pretty radical innovation at the time – and still hasn’t been bettered by any other system even up to the present time!

Although the German armed forces never replaced their 7.62mm MG3 machine guns with the HK21E, it did see service with German special operations forces, as well as with the German federal police. Internationally the HK21E did quite well too, particularly with countries that used the G3 rifle. While other weapons are more well-known, and/or have developed a devoted cult-like following among firearms enthusiasts, the HK 20-series is perhaps the world’s most severely underrated machine gun family. For those in the know however, and especially for those US and international special operations units that used it, its place in history is secured for being one of the most flexible and capable weapons of its type – ever.

The SAW That Could Have Been

Beginning in the early-1970’s the US Army’s Squad Automatic Weapon program was established to look into selecting a squad-level automatic weapons system to plug the gap between the M16 automatic rifle and the M60 GPMG – initially oriented around a 6x45mm round. NATO was also at this time looking seriously at 5.56x45mm rifles, but was also seeking a 5.56mm round that offered more stable ballistic performance over greater range than the M193 cartridge used by the US.

In the late ’70’s, a team at FN Herstal in Belgium came up with a new, heavier bullet design fired from a barrel with a tighter rate of twist (1:9) than the M16 (1:12). This improved “SS109” round could achieve an effective range of 600 meters and was adopted as the new 5.56mm NATO standard in 1980. NATO also chose a 1:7 rifling twist rate to adequately stabilize the longer 5.56mm NATO tracer round. Meanwhile, the American SAW program had also decided the 6x45mm round (for political and logistical reasons) and opted to focus on the 5.56x45mm cartridge as its standard as well.

The Heckler & Koch HK21A1, re-configured for 5.56x45mm and known to the US Army as the XM262, was a relative latecomer to the SAW trials. That it got in at all was largely thanks largely to the lobbying efforts of HK’s US importer/distributor. But due to the late rush to get it ready, HK hadn’t had time to develop a plastic ammunition belt container for the gun – as stipulated in the program specification. Nor was there time to make the weapon compatible with the US standard tripod mount, or to create a box-mag feed option either. All of which would seem to count against the weapon later.

In the end, the the Belgian-designed FN Minimi won the SAW competition and was adopted as the M249 SAW in 1982. Apparently, it was such a close-run ran race between the HK and the FN machine-guns, that the final deciding factors in the Minimi’s favor were:

The M249  entered service in 1984, and the battalion of the 82nd Airborne Division that I was serving in at the time (the 2nd Bn., 504th P.I.R.) was allegedly the first unit in the Army to receive them. As I was a designated automatic rifleman in our squad, I was issued with one in the summer of 1984. Right from the start I did not like the weapon – it looked like it had been built by Dr. Frankenstein, it was heavy and cumbersome to carry, the tubular buttstock was terrible, it was an absolute pig to clean, and the mag well was a useless appendage (we never did manage to get any of ours to actually feed from an M16 magazine).

The idea of mounting a light machine gun on a tripod in a fixed position seemed rather ludicrous as well – the whole point of the SAW was to give an infantry squad a highly-portable and maneuverable base of suppressive firepower (we also weren’t even issued with any additional tripods anyways – so I guess we were supposed to steal them from the M60 crews or something). Equally, the notion that the SAW gunner would burn through all of his linked ammunition and then take mags from the riflemen to continue laying down suppressive fire also seemed like an idea cooked up by a drunken staff officer with no infantry field experience. Needless to say, when I later came across some information about the HK XM262 I was rather pissed off that we hadn’t got it instead.

The adoption of the M249 by the US military opened the doors for FN to enjoy an immense amount of success with the platform internationally (it has basically become the de facto LMG of NATO), but it has nonetheless gone through several rounds of upgrades and improvements over the years – and yet still never achieved the same level of elegance and modularity as the HK 20-series. It’s also interesting to note that when the US Navy SEALS adopted a variant of the M249 platform as the MK46 they specifically deleted the magazine feed well and the tripod mount attachments.

However, in the end, it was probably the failure to win the US Army SAW program, and the lessons learned from that testing, that led to the creation of the superb, modular “E” model HK 20-series. HK would later try once again to win the US Army as a client with the XM8 program, which would also end as a spectacular failure. The company did finally achieve success with the US forces years later when they came up with a piston-powered version of the M4 carbine known as the HK416. HK also finally achieved a significant win with the US military, and achieved some vindication for having lost the SAW program to FN, when the US Marine Corps adopted an “Infantry Automatic Rifle” variant of the HK416 in 2009. Type classified as the M27, the USMC began fielding the IAR to replace some its SAWs in 2010. In 2017, the Marine Corps announced that it intended to issue an M27 to every single member of a Marine Rifle Squad.

Although the 5.56 NATO HK23E didn’t enjoy the same level widespread success as its big brother in 7.62mm NATO – similar to the HK33 vs. the G3 – it did see service with multiple countries, and a few of them are still around in the hands of private collectors as well. And speaking of collectors and connoisseurs, we’ve tracked down three of the best for you to appreciate below.

First up, the machine gun specialists at TSC Machine have painstakingly recreated a close-to-exact replica of the original XM262 as submitted for testing by the US Army:

Then there’s this elegant beauty:

And finally, this little buzzsaw built by Mike from Michael’s Machines: